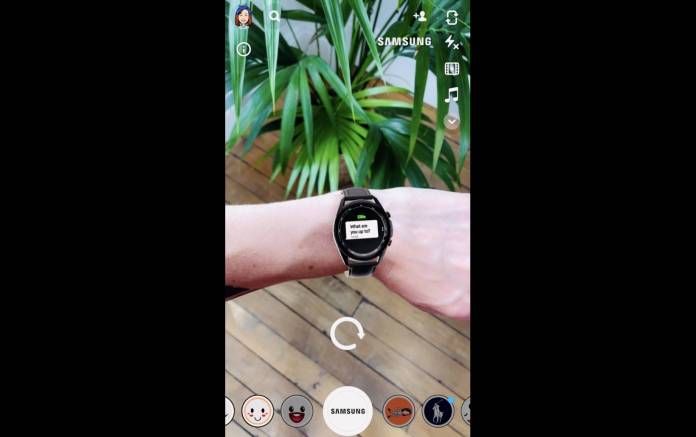 There are things that you wish you could try out first in real life before making your purchase. The past year though has forced us to rely more on online shopping and almost contactless purchasing. But one thing that online retailers haven’t really taken advantage of yet is augmented reality as it can bring some of that retail experience to a user’s space. Samsung has partnered with Snapchat to bring an AR simulation of its Galaxy Watch 3 to the social media platform.

Through the wonders of some wrist-tracking technology, you’ll be able to actually see how the Galaxy Watch 3 will look like in your wrist. All you have to do is open your Snap camera, scan a QR code or manually select Samsung from among the options. You will then see an AR version of the smartwatch and you can try on different faceplates and straps and see how it will look like or at least the closest it will look like on you.

There is also some Bitmoji support there so there should be a bit of fun involved aside from the functionality of this simulation. And when you’ve finally decided that the Galaxy Watch 3 would indeed look good on you (and after researching on its specs and features of course), you can just tap on the Shop button so you can go directly to the Samsung online store and make the appropriate purchase.

Snapchat of course has been utilizing the power of augmented reality for commercial purposes, offering brands like Samsung some AR experiences that they can try out. Well, that is if Snapchatters are your target market of course. They have also been using it to support social causes, including the latest one they did to have virtual statues to honor forgotten Black footballers, as per The Drum.

We don’t know if we’ll find out the effect this would have on the sales of the Samsung Galaxy Watch 3. And with the announcement of the next generation Galaxy Watch 4 imminent, they would probably want to make room for this upcoming new device.