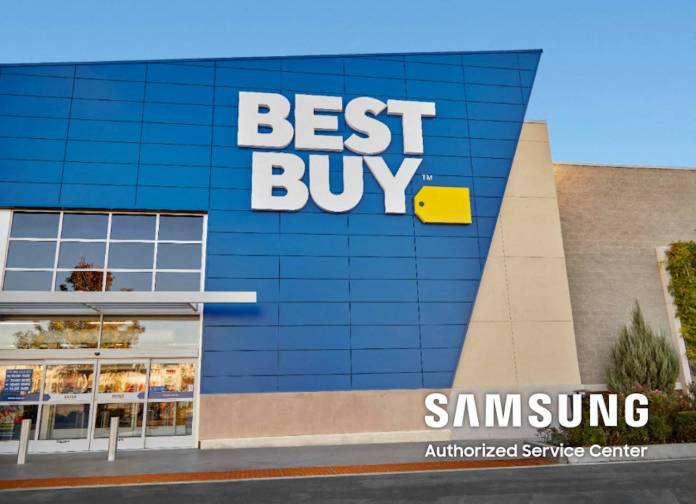 If you need to get your Samsung Galaxy smartphone repaired, you can now schedule an appointment at a Best Buy near you. Well, if it’s one of the new accredited locations that they have added to their list. Samsung is expanding its Authorized Care in-person support to over 100 Best Buy Stores starting October 26. At launch, you will only be able to get your Galaxy S and Galaxy Note devices repaired but eventually, the Galaxy Z smartphones will also be eligible.

Samsung Galaxy owners will now be able to schedule an appointment with the “Geek Squad Agents” at Best Buy stores that are designated Samsung Authorized Care Service Centers. They will be able to do front and back screen replacements, battery replacements, port and camera repairs, as well as other services both in and out of warranty. Previously, they offered some authorized repair services at select Best Buy stores but now they are expanding it from a pilot test to a full program.

Having repair centers more accessible through partnerships like this can help Samsung compete with rivals like Apple and Google. The former had a similar partnership with Best Buy a few years ago while the latter opened physical retail stores for customers who want to get their Pixel phones and Nest devices repaired, among other things. And with Samsung pushing even more premium devices in the market, having repair centers nearby would definitely help.

Samsung already has in-person support at more than 550 Authorized Care locations as well as more than 600 independent service providers all over the U.S. They also have “We Come to You” doorstep repair and contactless mail-in service for those that prefer not to go outside for their smartphone repairs. Hopefully they’ll add more Best Buy stores to their list since Apple has over a thousand already.

For now, only Galaxy S series and Galaxy Note series are eligible for in-store repairs at Best Buy. But by early November, they will be adding Galaxy Z foldable phones as well. To find out the store nearest you, check out the Samsung store locator on the website.