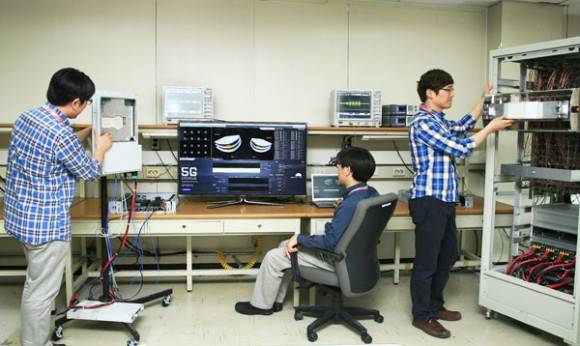 Samsung is currently working on new network technology that you can bet we’ll see in future Android smartphones. Samsung has announced that it has been successful with an impressive test of its next-generation 5G network. 5G networks are promised to be hundreds of times faster than current 4G mobile networks.

Samsung has announced that in testing its prototype 5G wireless network has been able to transfer data at up to 1 Gbps. Data has been successfully tested at speed over distances of up to 2 km. Samsung says that it’s 5G network technology is using 28 GHz ultra-high-frequency bandwidths. The company sees this technology as superior to similar 5G technology under development using 6 GHz bandwidth.

Currently Samsung says that the maximum transmission speed for its 5G mobile networks can reach the area of “tens of Gbps.” That would be fast enough to allow the download the complete 4K resolution movie in seconds according to Samsung. We’ve got a very long time ago before 5G networks are available around the country.

Samsung is currently hoping to commercialize its 5G technology by 2020. Competing 5G networks are also looking at 2022 to debut around the world. There are also a number of international standards unions working on standards for 5G technology.