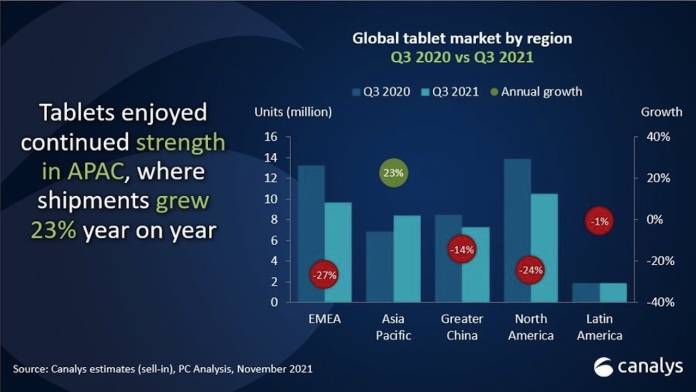 Tablet shipments may have dropped in Q3 2021 but the numbers are still better compared to before the pandemic. Apple still leads the tablet game with 40.4% market shared. That is an increase from 34.4% last year, same quarter. As for Samsung, it’s number two with 19.1%. It has seen a drop from 20.4% that has actually led to a -20.2% growth. Last year’s increase in numbers was because of the pandemic.

As most of the world were in lockdown, more people purchased notebooks and tablets to use at home. Sales may have slowed down a bit as some economies have started to open up but we can expect a surge in Q4 as the holiday shopping season approaches.

Samsung shipped about 7.2 million tablets so it is number one when it comes to Android tablet. Lenovo followed with a 2% growth year-on-year, shipping 4.2 million units. Amazon and Huawei followed to complete the top five ranking even with numbers going down by 45% and 51%.

As for the PC category, Lenovo is still number one with 24.4 million units and a small increase of over one percent. Apple follows with a 5% growth to 23 million units. HP, Dell, and Samsung fill up the top five.

When it comes to Chromebooks, the Chrome OS-powered market is now led by Lenovo. However, its numbers have declined year-on-year by 21%. That’s still better than the previous top brand, HP, which saw a 66% decline year-on-year.