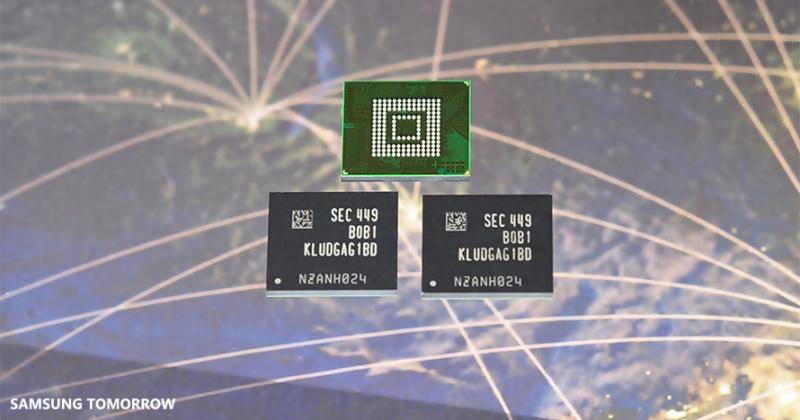 Mobile CPUs and GPUs have becoming faster and, with the introduction of LPDDR4, so is RAM. That leaves internal storage or flash memory as the bottleneck of a device’s performance. Well, not anymore, at least if Samsung‘s promises are to be believed. The manufacturer has just revealed a memory chip that is claimed to be the industry’s first 128 GB capacity flash storage that adheres to the not exactly new Universal Flash Storage 2.0 standard that promises SSD speeds at the power consumption level of eMMC.

Currently, all flash storage uses the eMMC or embedded multimedia card standard. This standard has undergone several revisions over the past years, with the latest, version 5.1, just released this year. While still improving bit by bit, Samsung believes that UFS 2.0, which was made a standard back in 2014, is the future of mobile storage.

In a nutshell, UFS 2.0 improves the read and write performance of flash memory in two ways. The first is that it has dedicated channels for reading data and writing data. This means that it can read and write at the same time. In contrast, eMMC only allows for either reading or writing at a time, never both at the same time. The second advantage of UFS 2.0, which is actually already incorporated into eMMC 5.1, is Command Queueing or CQ. UFS 2.0 can lump together read or write commands in a more efficient way. It can even order the tasks to optimize the process. With eMMC 5.0 and older, the system has to wait for a prior command to finish executing before sending out the next one.

The resulting performance boost might not look that staggering on paper, but in overall performance it means a world of difference. Compared to eMMC 5.1, sequential read goes up from 250 to 350 MB/s, while sequential is improved from 125 to 130 MB/s. Random reads, measured in input/output operations per second or IOPS, is more impressive, up from 11,000 IOPS to 19,000 IOPS. Even random writes are improved though not by much, from 13,000 to 14,000 IOPS.

Samsung has not yet announced when the memory chips will be shipping, but we can expect them to be present in the next generation of flagship smartphone. Aside from 128 GB, the UFS 2.0 memory also comes in 32 and 64 GB capacities.