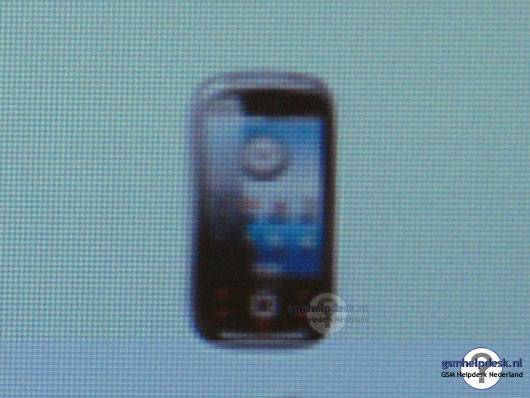 A pixelated picture of the first Samsung Android smartphone has been released, as part of a Samsung dealer presentation in Amsterdam today.  Details of the device are incomplete, but it’s known to use a large capacitive touchscreen and a 528MHz processor of unknown manufacture.

Other known specifications are quadband GSM (850,900, 1800 and 1900MHz) together with UMTS, HSDPA 7.2Mbps and HSUPA 1.4Mbps.  It’s predicted to be made in two versions, one with US-friendly UMTS 900MHz and the other with Europe/Asia-friendly UMTS 2100MHz support.  Elsewhere there’ll be Bluetooth 2.0 with A2DP wireless stereo support and a digital camera, though there’s no specific megapixel count; expect somewhere between 3.2 and 5-megapixels.

As for storage, Samsung claim there will be a large amount of onboard capacity, expandable with microSD cards, however no actual figures have been confirmed.  Apparently the official announcement is not far off, but again, a specific date is not known.