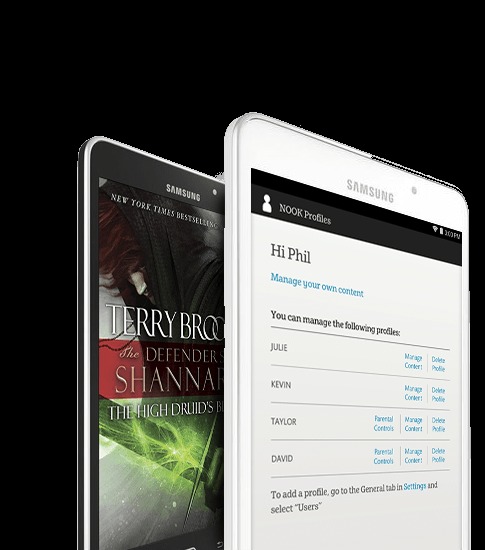 What do you get when you marry Samsung’s latest Tab and Barnes & Noble’s Nook e-reader? Well, then you have the Samsung Galaxy Tab 4 Nook of course. B&N announced today that the newest gadget is now available on their online retail store. As an initial promo, they will be offering a $20 “instant rebate” for early purchases of the tablet that is being positioned as primarily an e-reader.

So how different is it from the normal Samsung Galaxy Tab 4? Well basically it is the 7-inch, 8GB variety of the Galaxy Tab 4 series, but it comes pre-installed with the Nook Reader app, the Nook Newsstand for your newspaper and magazine subscriptions, and the Nook Video for downloading or renting videos on their store. Nook Apps is also there, but it only has apps that have been reviewed and approved by the Nook team. But you will also be able to access Google Play Store and install other Android apps as well, including Nook competitors like Amazon Kindle, Kobo, Bluefire, etc.

While it’s probably more of a branding exercise rather than a desire to create a new product, how we wish they could’ve added more incentive for people to actually purchase this gadget. The Nook Reader and the other Nook apps are some things that can be installed in other Android tablets as well. Sure, they also added in a few pre-installed $200 worth of freebies like one episode each of Veep, Hannibal and Orphan Black, several ebooks and trial subscription to some magazines. But really, these are also some things that can be easily acquired in other gadgets.

But maybe you’re a fan of B&N or you just want a new tablet and this one seems appealing to you. The Galaxy Tab 4 Nook is available for $179, which already includes the aforementioned $20 rebate. It comes in black and white varieties and is obviously cheaper than the $229 Amazon Kindle Fire HDX.