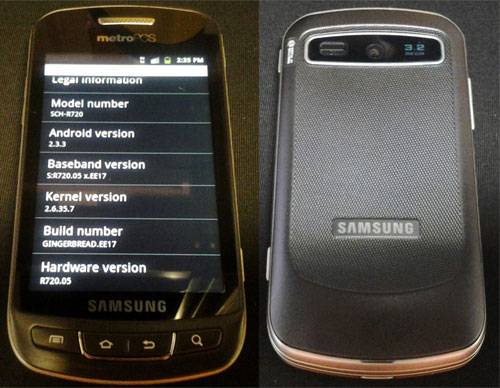 Look guys we have a leaked handset that was shot by someone other than Mr. Blurrycam because these images are actually pretty decent. I love when we get leaks where we can actually see details, and on this one it reveals plenty. Like Android 2.3 Gingerbread to be more specific.

This appears to be a mid-range device headed to MetroPCS and the fact that it runs 2.3 Gingerbread might have a few of you excited. It isn’t top of the line and according to our friends at Howardforums it features a 3.5″ display, an 800 Mhz CPU, the pictures show a 3.2 MP camera but we don’t have much else to go on.

Code name is listed as SCH-R720 and we are hearing a August/September launch but sadly it wont have 4G speeds. It looks a bit like a LG Optimus One but made by Samsung if you ask me, but what do I know. It should come in around $149 as well but we will know more as the device gets closer to launch.