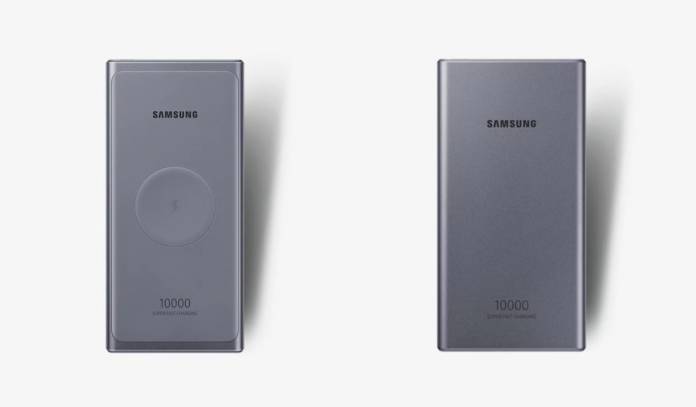 Samsung has made support for 25W fast charging a standard on their smartphones since the release of their Galaxy Note 10 and Galaxy Note 10+ phablets in 2019. We know that they are also coming out with 25W fast charging power banks and now the two variants have quietly shown up on the Samsung website, the 25W Wireless Battery Pack and the 25W Battery Pack. Soon, we’re also expecting a new accessory to show up there, the 45W Dual & Super Fast Car charger.

Based on the product name, you’ve probably figured out what the difference between the two power banks is. But in case you need further clarification, here’s some information about them, based on their product listing. The 25W Wireless Battery Pack has a capacity of 10,000mAh and has two USB Type-C ports. You can charge a compatible smartphone that supports 25W charging via the USB PD standard. It also has Qi wireless charging so you can power up your phone, smartwatch, or wireless earphones by placing them on top of the power bank.

The 25W Battery Pack meanwhile also has a 10,000mAh capacity and two USB-C ports. The obvious difference is that it doesn’t have wireless charging capabilities. But both power banks will only support 25W fast charging when only one device is being charged. If you’re juicing up two devices, then you’ll get the standard charging support. There are no price points indicated yet but it will probably start going on sale alongside the Galaxy S20 devices.

When it comes to 45W super-fast charging, the Galaxy S20 Ultra is only the second flagship from Samsung that supports it, alongside the Galaxy Note 10+. Soon they will be releasing the 45W Dual & Super Fast Car charger. It has a standard USB port that gives a 15W output and a USB-C port that gives the 45W output. It has a 5A USB-C to USB-C wire that you need for the 45W charging. It can charge devices like the Galaxy Note 10, Galaxy S20, and Galaxy S20+ at 25W.

We’ll find out more about the power banks and the car charger over the next few days, especially when the new flagship devices become available in the market. They will probably go on sale at the same time as well.