That 70 million number is said to include all apps, and otherwise, includes 30 million registered users. More to the point for those already using Runtastic on an Android device — what is this update adding. Some of the highlights here include a new drawer navigation with what is being touted as an “easily customizable and redesigned” main screen. One interesting feature is the color trace map, which allows you to track your pace or heart rate. 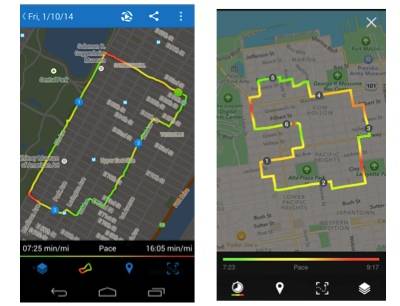 Otherwise, there is also something called the hydration feature. Details coming from the folks at Runstastic touch on how this means users will get a “post-activity hydration suggestion.” This suggestion is based on activity details, personal stats and local weather conditions. Runtastic 5.0 also brings in music. In this case users will be able to control Google Music, Spotify, Pandora and more — without leaving the Runtastic app.

Another highlight feature is the addition to training plans. This marks the first time these will be available on Android. The training plans will vary in price and include a variety of options ranging from weight loss to bikini body prep. Naturally, running goal plans are included for beginner levels, 10k runs, half marathons and full marathons. That all being said, Runtastic 5.0 can be downloaded from the Google Play Store.