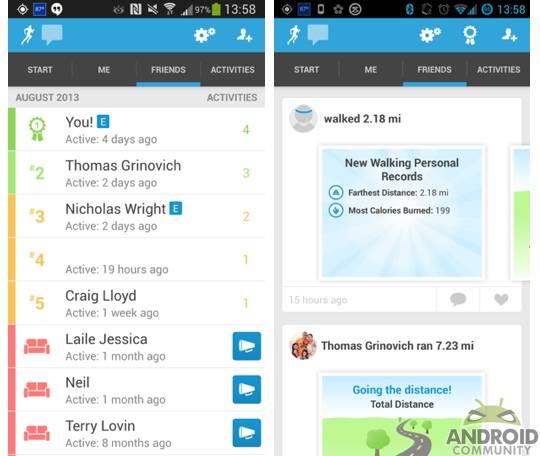 RunKeeper for Android v3.7 arrived in beta form earlier in the week and as of today, that update is now ready for primetime. Simply put, RunKeeper v3.7 has landed in the Play Store. The changelog isn’t particularity long for this update, however it does bring a new and improved Friends tab. Basically, the folks at RunKeeper have made the Friends tab more interactive.

As mentioned, this update basically made the Friends tab more interactive. The Friends tab was available in earlier builds of the app, but as you will see in the above screenshots, the new and improved offers quite a bit more. The before is on the left and the after is on the right. The earlier version of the Friends tab was a simple list and allowed you to view an overall ranking and the number of activities.

For some that was good enough to keep them motivated, but the only real interaction in the past was to “tell” your friends to go for a run, walk or bike ride. Or in other words, you could nudge the friends that hadn’t exercised recently.

This update allows you to tap to like the activity and also tap to comment on the activity. There are also more details provided in terms of the updates. For example, you can now see any records your friends may have such as distance and calories burned. It also shows the the mileage for that particular workout and tells you how it compares to other activities.

Bottom line here, if you are a RunKeeper user and like to encourage (and get encouragement) from others — this latest Android app update should be along the lines of what you may have been looking for. As for this RunKeeper user, it gives me one less reason to visit the website.