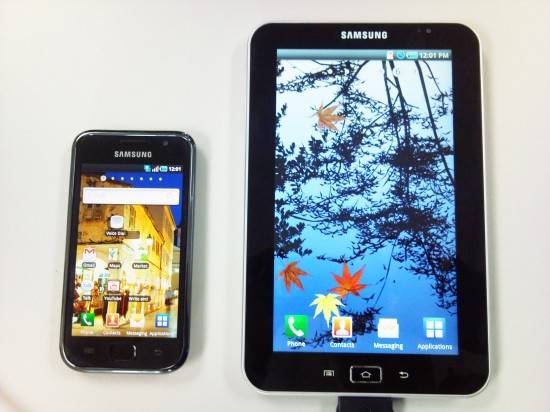 More news of the latest member of Samsung’s Galaxy family is starting to flow in. this time around a Vietnamese site by the name of Tinh Te, is claiming to have information on a few specs. If they are true this will be a pretty impressive tablet. Samsung has a history of being able to deliver hardware pretty quick so the wait for this slate may not be as long as most.

Some of the rumored specs include Android 2.2, yes folks, this may very well be the first Froyo powered Android tablet. Also, there’s a 1.2GHz ARM Cortex A8 processor, 16GB of on-board storage and a microSD slot that can handle up to 32GB. That would bring the grand total to 48 GB which is enough for all your movies and music. The 4,000mAh battery should be enough to last you throughout the day.

From the leaked picture, there appears to be a front facing camera. This tablet should come with the GPU from the Galaxy S and the DLNA capabilities. There was no mention of Bluetooth and Wi-Fi but I fully expect them to be included.