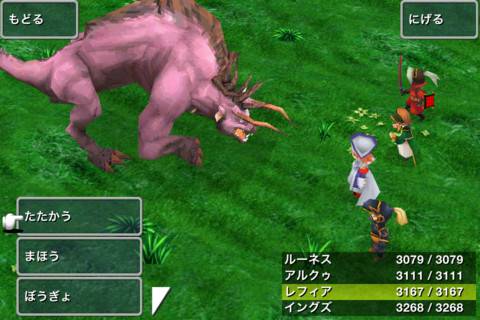 Ready for some classic role-playing? Then break out your pocket translator (insert “there’s an app for that” joke here). Gaming giant Square Enix has released Final Fantasy III, widely considered to be one of the all-time greats of console RPGs, for Android. The bad news is that it’s limited to Square’s in-house market at the moment, and region-locked to Japan. You can’t even pull some build.prop mods to get around it in Android Market/Google Play, since there’s no app to be had in there.

Final Fantasy III was originally released way back in 1990 for the FamiCom, the Japanese version of the NES. While its innovative class-switching system and expansive story were widely praised, the game never saw a release outside of Japan until more than a decade later, when a reworked and remastered version of the original made its way to the Nintendo DS in 2006. This version was localized for North America and Europe, and added gameplay tweaks and fancy 3D graphics while retaining its original story. This updated version has been available on iOS for over a year, and according to the Square Enix website, it’s now been ported to Android.

There’s no word on when or if the game will make its way outside of Japan, but it seems pretty likely that we’ll get it eventually – all that’s really necessary is to adapt the localized dialogue and interface from the iOS version. A better question is whether or not Square will see fit to release it on Google Play. Though the Japanese version of the iPhone game is published via iTunes, the Android version is only available directly from Square, netting them a tidy 30% profit on Android. They wouldn’t be the first company to do so with a major release, but it would be a big hassle for Android gamers everywhere.