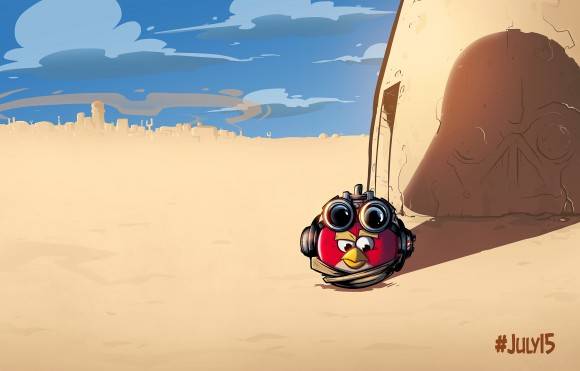 Rovio has come forward with the promise of “big news” coming next week. Specifically, they have announced how they will have an announcement coming on Monday. The details are what one would expect from a teaser like this — light. But with that in mind, this looks to be an announcement that Star Wars fans may want to check out.

The teaser came along with a hashtag of #July15 and the image sitting above. Of course, that image is the reason we are looking towards Star Wars. Rovio has also promised this will be a “brand new game” and that it will include the “biggest character line-up ever, awesome new powers, and maybe even a few surprises!”

Basically, it is looking like we are going to be seeing a sequel to the current version of Angry Birds Star Wars. Those who are fans of Star Wars will likely see some details in the picture. There is the Angry Bird that has the appearance of a young Anakin Skywalker. And in the background, you see his shadow is actually Darth Vader.

Otherwise, the current Angry Birds Star Wars game remains available for free by way of the Google Play Store. That release was last updated back in the middle of June. That was the Lando Bird update which added 20 new levels along with some new power-ups. While we wait for the news to arrive on July 15th, now seems like a good time to finish up any remaining levels on this current release.