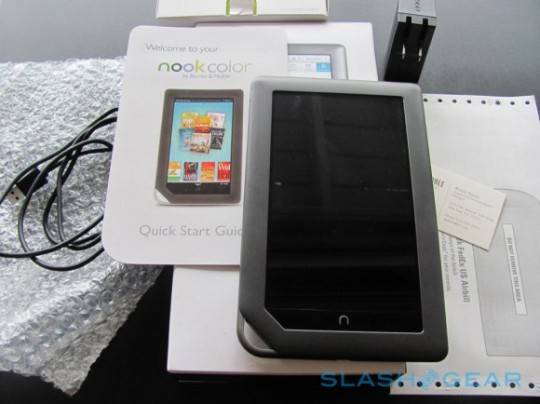 There’s a great line in the movie Apollo 13 where Gene Kranz, the flight director of the mission, says “I don’t care what it’s designed to do, I care what it CAN do!” That couldn’t be more true for the Barnes and Noble NOOKcolor eBook reader which is turning into a pretty adaptable Android tablet. The latest hack comes from CM7 Developer “Kmoobs” who managed to bring bluetooth capability to it through CM7 Nightly for Encore which takes advantage of the hidden bluetooth capability of the NookColor’s WiFi chip. The capability is turned off in the software and CM7 Nightly for Encore re-enables it.

The nook color guys are incredible. You can now place calls using a BT headset on the nook color running CM7 with a SIP account.

An in addition to having Bluetooth capability, Kmoobs says that he can make phone calls, presumably through something like the Android Skype App and a bluetooth headset. A very cool feature which opens tremendous possibilities for those on a budget who want an Android Tablet that they can play around with. This comes on top of users overclocking their NOOKcolor and getting up to nearly 1Ghz in processing speed and allowing it to become a fully functional Android Tablet. Too bad it doesn’t have a camera in it!

As we reported last month, Barnes and Noble had stopped shipping the NOOKcolor temporarily and speculation was that maybe they were putting the brakes on the Android Developer crowd until they found a way to relock down the Android Nook environment. But later it was revealed that the tablet was selling like hotcakes and that the pause was largely due to reapportioning the available supply so all stores could keeps it in stock. And when one considers that most eBook reader sales come from the Kindle 3 or the iPad, maybe Barnes and Noble has discovered a way to stay in the game, but appealing to the hacking element that loves to tinker.