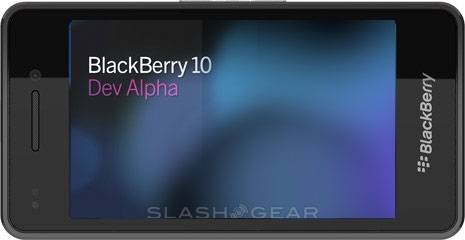 The world of RIM and Blackberry is all shook up at the moment with their announcement of Blackberry 10 and their developer alpha device. We don’t really talk much about Blackberry around these parts but you can get all the details from our sister site SlashGear, as they had plenty of coverage. After seeing the Blackberry 10 sneak peak video shown below, I was pretty curious and wanted to see what our readers thought. Check it out after the break.

The image above is of the Blackberry 10 Dev Alpha Device from what we are hearing, and basically looks like a smaller Playbook shaped more like a phone. Hey, at least the OS appears to finally be ready for … err I meant 2012. While we don’t get a good look at the OS in general RIM did show off a few neat things like that impressive keyboard. That is about the only thing that caught my eye other than the tidbits of Android’s Ice Cream Sandwich colors and menu buttons.

Pretty neat? Or too little too late? I must admit that keyboard predictive text is pretty innovative and looks amazing. I want it already. I wonder how long it’ll take for that to appear in the Google Play Store — I’m giving it 2-3 weeks tops. Anyways check out all of the Blackberry 10 coverage from the SlashGear link provided above, or from the video, then let us know what you think.

Will Blackberry 10 compete with Android or iOS? Is it too late for RIM? Should they do what Nokia should have done and just jump to Android? Lets hear it all in the comments below!