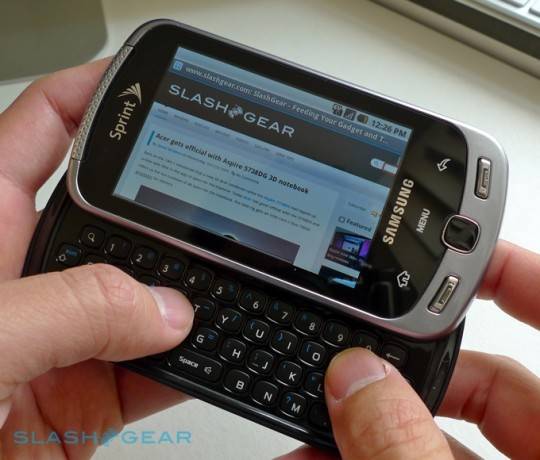 If you have been waiting to find out more about the Samsung Moment, than now it’s your opportunity. Our fearless Head Chef BBQ has reviewed the latest of the Android phones on Sprint’s line-up over at SlashGear. And apparently, he does like it.

Most of those who read the specs on the Samsung Moment, normally drool about the 800MHz processor, hey, I don’t blame them, here between us, I did that exact thing. But, there are also things that this new Android phone needs, like a reworked UI – a la MOTOBLUR or HTC SENSE, for example – and also a more extensive social network integration.

Now the keyboard, that’s the first thing that impressed everyone that handles the Samsung Moment, and Ewdi was no exception. He likes the audible click when each of the large keys are pressed, and believes that the offset layout better replicates that of a regular keyboard. However, not all the keyboard is great, there are certain “annoying” things about it.

I don’t want to spoil it for everyone though, so if you want to see more images of the Samsung Moment from Sprint, as well as a small Screen Test video of the beautiful AMOLED capacitive display, well, head on over to SlashGear. Enjoy!