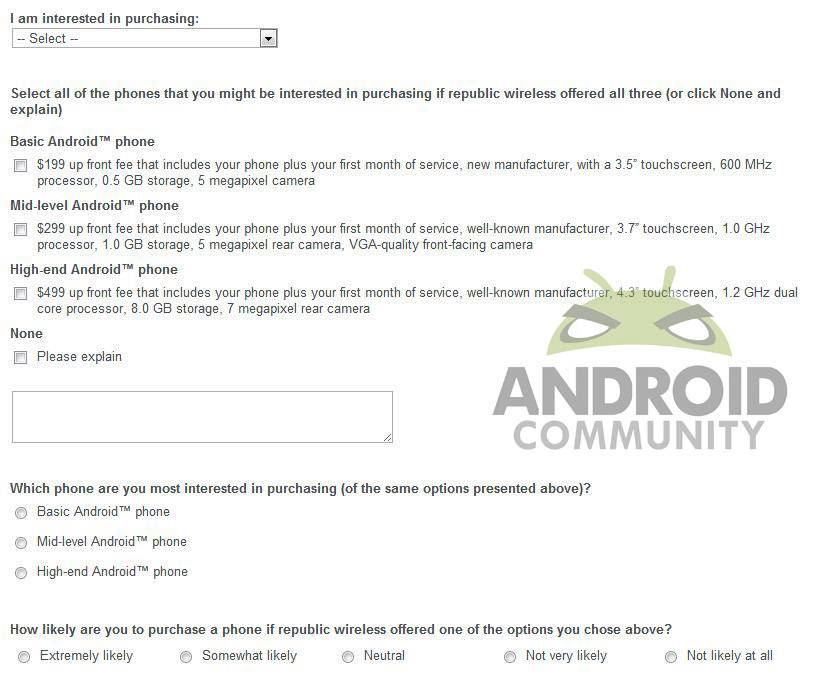 Those of you who jumped on the chance to join Republic Wireless, a hybrid VOIP/mobile service with eye-popping low rates, are probably receiving your beta invitations now. Republic’s unlimited WiFi calling and mobile data for just $19 a month is tempting – but their sole phone, the 1.5-year-old Android-powered LG Optimus One, isn’t. As part of the survey for its latest Beta wave, the service provider has added a few details for its plans to expand its Android offerings.

The lowest-tier phone will cost $199 without a contract, and will be incorporated into the cost of the first month’s service. The current LG Optimus One is decidedly low-end, but the upgraded phone (which isn’t named) will have a 3.5-inch screen, 600mhz processor and a 5 megapixel camera. The mid-range Republic Wireless offering bumps things up to 3.7 inches, a 1GHz single-core CPU, a 5MP rear camera twinned to a VGA front-facing cam, and gigabyte of storage for $299.

Republic’s top-of-the-line phone will cost $499 off contract and feature more modern specs: a 4.3-inch screen, 1.2Ghz dual-core processor, 8GB of storage and a 7 megapixel camera (possibly a typo intended to be 8 megapixels). All three phones will unfortunately run Gingerbread in order to work with Republic’s unique software, but the company says it’s already looking at upgrades. 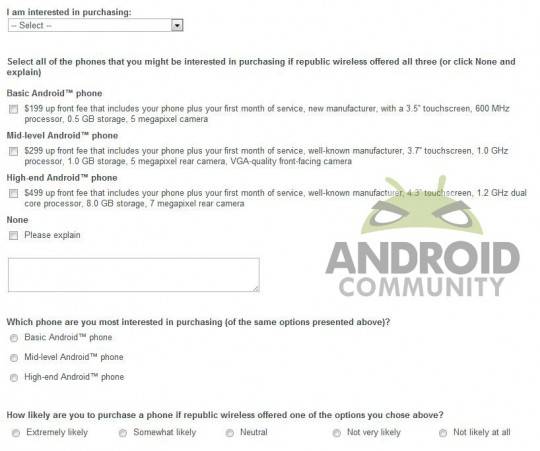 Would-be Republic Wireless customers don’t have the option of importing a phone from another carrier. This isn’t some kind of malicious policy – the WiFi-to-CDMA switching hardware that allows for a seamless transition is unique and has to be built into new phones. Republic says that it will begin offering newer Android phones in the summer, though the more expensive options may have to wait.