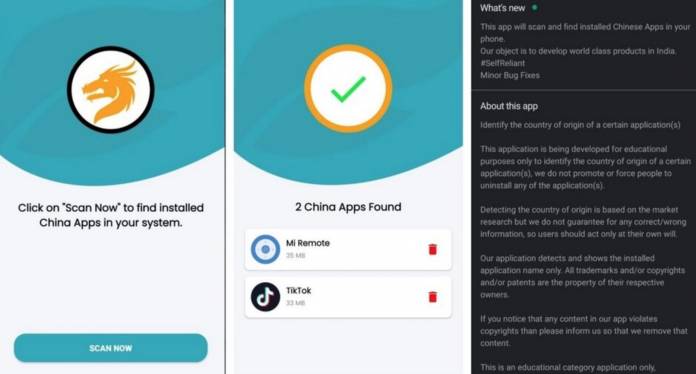 As a sign that anti-China sentiment seems to be growing, one of the most popular apps in the Google Play Store over the past week was an app called Remove China. It would tell users which apps were developed in China and ask them which ones they wanted to remove. Google has now removed the app as it was in violation of Google Play’s Deceptive Behavior Policy. The app developers say they created it for “educational purposes only” and to support Indian Prime Minister Narendra Modi’s call for a self-reliant India.

According to Phone Arena, the Remove China app became so popular and had one million installs by the end of Sunday and even reached five million until yesterday. It was launched just last May 17 and the developers said it was to support the campaign by identifying the country of origin of the app installed in the phone but it didn’t ask any permissions from the user. It list applications and the country name and then lets users choose which to uninstall and keep.

The app’s popularity has now come to an end though (maybe temporarily?) as Google suspended the app for violating the Deceptive Behavior rules. An app is not allowed to encourage or incentivise users to remove third-party apps. They also cannot mislead users into removing or disabling those apps. Google did not further explain their decision but it is always possible to appeal the decision but there’s no guarantee it will be restored.

As for the Jaipur-based developers of the app, they said their app was not promoting or forcing people to uninstall any of the apps that they were listing. The app also doesn’t automatically remove the apps anyway but gives the choice to the users. They use market research to determine the country of origin and it was only created to “educate” people about where the apps are coming from.

But with a name like Remove China, it will be hard to convince people that your app does not have that motive. And with anti-China sentiment growing not just in India but in a lot of countries, it’s no wonder the app surged in popularity. Well, until Google stepped in.