A lot of people have played around with the idea of Android as a working operating system in a PC-like environment, complete with keyboard and mouse support, resizable windows, a taskbar and all that. But very few have come close to executing it where it actually works. Is the Remix Mini – now up on Kickstarter campaigning for crowdfunding support – the Android PC that we all deserve? 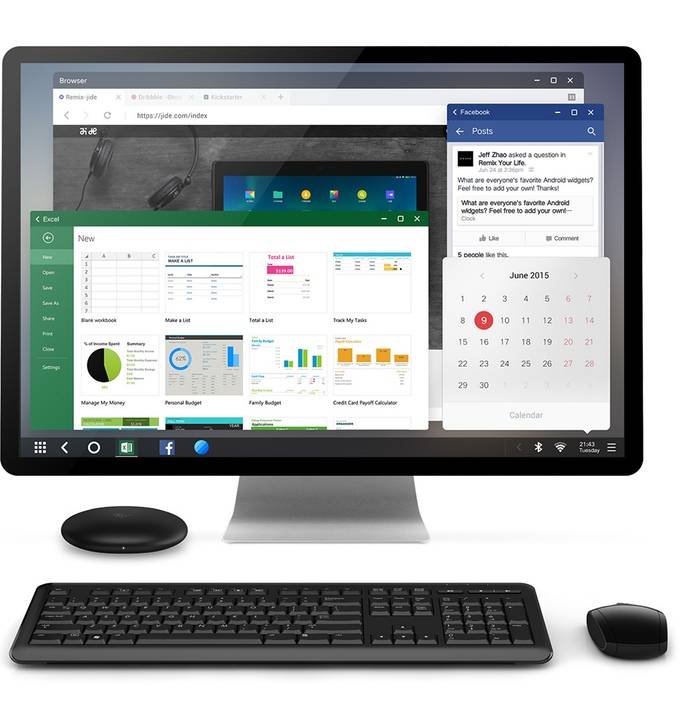 There’s no doubt that the Remix Mini is elegantly designed, in a very minimalist approach – the whole thing can fit in your hand. The core chipset is a 64-bit capable 1.2Ghz quad-core Allwinner processor. We wish they would have gone with a Qualcomm or a MediaTek processor here, but whatever floats the boat is ok in our book. Then you get a choice of whether you want a 1GB RAM/8GB internal storage variant, or the more robust 2GB RAM/16GB internal storage variant if you’re thinking you need it to pack a little more punch.

The Remix Mini has a cute capacitive “power button” on top that’s not really a button. You tap the Remix logo to wake your little Android PC to life. Output and input options are the standard ones you would expect. Bluetooth 4.0 is recommended for your mouse and keyboard, WiFi for internet connectivity, although a dedicated Ethernet port is also available for a more stable connection. You have two USB 2.0 ports, and a 3.5mm headphone port just in case you need it.

But at the heart of Remix is the re-imagined Android OS – the developers call it Remix OS. It combines the versatility of Android, with over 1.5 million apps at your disposal, with Windows’ affinity to big screens and mouse/keyboard compatibility. The taskbar makes it all happen. Then you have multiple window support, and resizing is possible, just like on your PC. Keyboard shortcuts! Oh yes please – Remix OS features 15 of the most common keyboard shortcuts we use and enables them on Android.

It’s basically Android Lollipop, but the developers call it Remix OS 1.5. You can support this device over at Kickstarter (check source link below). Just USD$20.00 of support gets you a Remix Mini 1GBRAM variant, but those spots are all gone as of now. USD$40.00 gets you a 2GB variant, while USD$60.00 gets you to Remix Minis – one 1GB variant and one 2GB variant. If you’re really looking to make an office out of this, pledge USD$200.00 and you get five Remix Mini 2GB variants. The developers expect to ship by October 2015.