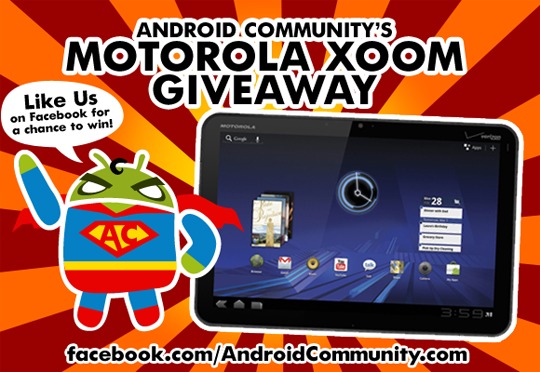 In case you missed it, in case you didn’t know yet, in case you somehow haven’t seen our reminders before, we need to tell you…we have AN XOOM CONTEST going on! We have a total of FIVE XOOM tablets we’re giving away. Two of them have already gone to new homes, and one will be given away at SlashGear.com today, but there is still one week left to win an XOOM from Android Community. You still have two more opportunities to win an XOOM, that super awesome Android 3.0 Honeycomb tablet, with NVIDIA’s Tegra 2 dual-core processors. The XOOM is just waiting to go home with you.


To win one of these fabulous tablets, you must:

Contest begins April 11, 2PM PST, and ends May 1, 2PM PST. A winner will be announced every Monday @ 5PM PST here in the main news feed and at our official Facebook page.

WINNERS will be given the opportunity to submit a review of their XOOM and have it posted on the front page of AndroidCommunity.com! *Reviews may be edited or modified before publication and are considered works for hire under the 1976 Copyright Act. Submissions will be ineligible for payment or remuneration.

Competition is open to residents of the US over the age of 18. One entry per contest per person. Family members of Google and SlashGear/Android Community are not permitted to enter. Competition entries are only accepted via the specified Android Community Facebook page; entries left in the comments section of this or any other post will not be recognized. One entry per person (and yes, we check). Winners of the April 2011 SlashGear XOOM giveaway are ineligible to win the April 2011 Android Community XOOM giveaway, and vice-versa.
The winners will be announced on SlashGear and will be expected to contact Android Community via the following email: [email protected] ; they will be expected to respond within 24 hours else their prize may be forfeit and another winner selected. Editors decision is final and no correspondence will be entered into. Winner agrees that their name and details of their entry may be used for promotional purposes by, but not limited to, NVIDIA and Android Community.
Prize consists of five Motorola XOOM Wi-Fi-only tablets distributed between SlashGear and Android Community: 2 for SlashGear’s contest and 3 for Android Community’s contest. One prize per winner. There is no cash alternative or any other alternative for prize winners unless this prize should become unavailable, in which case Android Community and NVIDIA reserve the right to substitute another prize of equal or greater value.

Contest provided by SlashGear/Android Community. Prizing provided by NVIDIA. Any questions regarding this contest should be directed to [email protected]