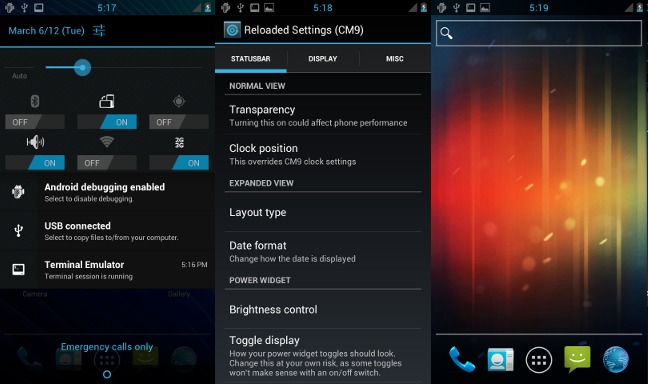 One of the best features of the CyanogenMod family of ROMs is its integrated power menu that hangs out in the status bar. It’s so handy that it’s downright difficult to adjust to a ROM that doesn’t have it after you’ve used it, which is probably why all the other ROMs that didn’t have a similar feature already are adding it in. If you want even more options when it comes to your Ice Cream Sandwich experience (And if you’re reading this, then yes you do) try out ReloadedICS, from a team of developers over at XDA.

ReloadedICS brings a lot of the functionality from the up-and-coming AOKP ROMs and adds a bunch of new variables that you can adjust in the settings. These include menu bar transparency, date format, a brightness slider, changing the clock location, a tabbed layout for alerts, and a WebOS-style horizontal layout for the recent apps function. Just about any custom Ice Cream Sandwich ROM can use it: it isn’t limited to CyanogenMod. So as long as you roll deodexed, you’re golden.

The modifications to Android require a little more than your standard app, so you have to apply Reloaded ICS via a recovery ZIP. Unfortunately these modifications are geared towards smartphones only, as the SystemUI for Ice Cream Sandwich varies pretty drastically between smartphones and tablets. There’s some pretty extensive changes here, so as always, make sure to create a Nandroid backup before you get your tweak on.