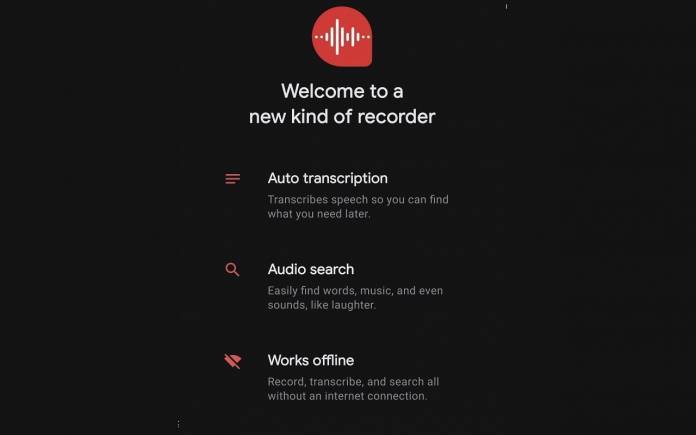 Some Pixel 4 apps were made available for some Android 10 phones. It was unofficial but we were given a glimpse of what the upcoming Pixel 4 phone can offer including the new Pixel Launcher, live wallpapers, and a new voice recorder app. The latter is a new feature that captures audio and provides live captions. Simply put, this Google Recorder app allows the user to record audio using the mic and then automatically transcribe the audio recordings. With the transcribed records, you can then search through the text.

The Google Recorder app was leaked recently but it’s getting an update with the said automatic transcription of audio recordings. A welcome note also now tells the phone owner that all audio recordings, finished transcriptions, and searches are done offline. This means no need to connect to the Internet or go to the cloud.

Audio search is also a new feature. Obviously, it’s made possible by the recording of audio that that turns into readable and searchable text. The information was from XDA developer Mishaal Rahman who described his experience after getting the update.

The Google Recorder app isn’t available yet. It may be released officially as well once the Pixel 4 and Pixel 4 XL phones are out. The big event may be happening on the 15th of October. Let’s wait and see for the official reveal of the new Pixel 4 phones. By then, we’ll know what new apps and features are ready.