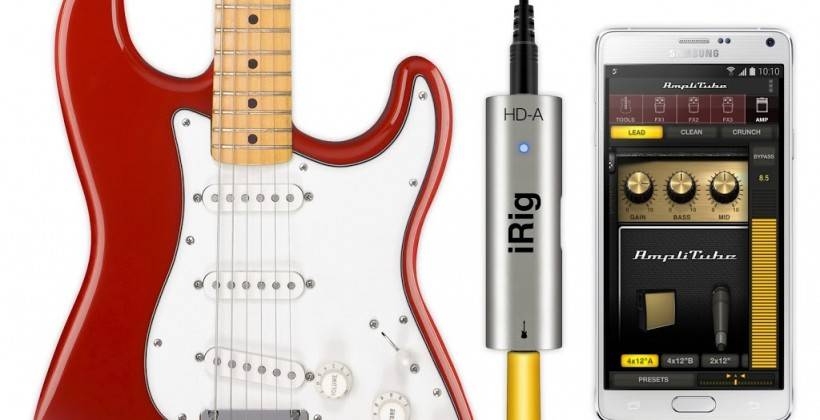 Back in the day (well, just a few years ago actually), in order to make a decent recording of you playing your instrument or singing, you needed to go to a recording studio or have high-tech (and expensive) recording equipment at your house. But of course, now there are apps and gadgets for that and all you would need is an instrument, a plug, an Android device and of course there’s also an app for that.

The iRig HD-A is a recording device that you can attach to your Samsung Galaxy Note 4 or any other device that has Samsung Professional Audio, and together with the AmpliTube app, you’ll be able to record yourself riffing on your guitar without even having to step out of your room. Its developer, IK Multimedia, says the plug-and-play device is the first digital guitar interface for Android devices. It also has a 24-bit/48kHz converter plus a multicolor LED. If you want to use it on your PC instead, it also has a USB cable so you can plug it in there as well.

The AmpliTube app will enhance your guitar playing, well, at least through its various features and effects, which includes 5 amps, 11 stompbox effects, 2 microphones and various emulation options. If you’re feeling lazy to create various combinations, there are 15 presets available for you to choose from. It also has a digital tuner to help you keep your guitar always, well, in tune. There are 3 different varieties of the app all with corresponding number of effects: free, LE and full.

Of course having this capability to record on your smartphone or tablet will still not be cheap, but at least it should be cheaper than always going to a recording studio. The iRig HD-A is priced at $99.99, with the adapter costing you an additional $39.99 plus if you want a Stomp guitar pedal, that will set you back $69.99 more. The AmpliTube app can be downloaded from the Samsung Apps store. LE version is at $9.99, full version is at $19.99 and the free version is of course $0.00.