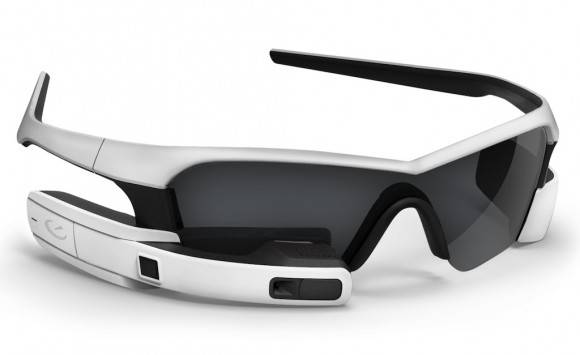 Google has their popular Google Glass, and now the folks from Recon Instruments have revealed their own wearable computing glasses here at I/O. Only they have a different approach with what they are calling the Recon Jet. Last year we saw their micro display tech in Snowboard Goggles, and today they’re bringing Glass-style to all types of athletic eye wear for the thrill seeker in you.

With the Recon Jet you’ll get a similar experience as Google Glass, with a little floating display sitting neatly out of sight. Yet still in sight down on the lower right side of your right eye. Just like Glass they’ve integrated most the specs of a smartphone into the glasses, with an optical pad on your right side for easy navigation. There’s no voice commands like Glass, not yet at least, but in concept they work quite well.

Then of course these are running on Android 4.2 Jelly Bean, but won’t work like your average smartphone obviously. Inside, it is being powered by an unknown dual-core processor and 1GB of RAM. Then we have WiFi, Bluetooth, and GPS, along with ANT+ fitness connectivity. Sensors include an accelerometer, gyroscope, altimeter, magnetometer, and a thermometer, while an HD camera pokes out the front.

We don’t have all the details on internal storage, battery life, or even the brand and speed of the dual-core processor. These features are set in stone though, even if we weren’t able to find out the resolution of the micro display your eye will be focusing on when in need. Being here at IO and wearing both Glass, and the Recon Jet, Glass is currently a higher resolution display. That could change as the Recon Jet gets closer to the release date later this year.

Being built right into nice sports eyewear for snowboarding, hiking, mountainbiking and more they aren’t as noticeable as Glass, but clearly can be seen with ease on the shades. Uses include activity tracking and fitness monitoring, tracking health and performance, updates on weather, speed, and more. Then of course music and video streaming. The Recon Jet can also be used as a remote display for apps running on your phone or tablet, and the company says it’s working with “some of the top fitness companies and communities” to cook up titles in time for the eventual launch. 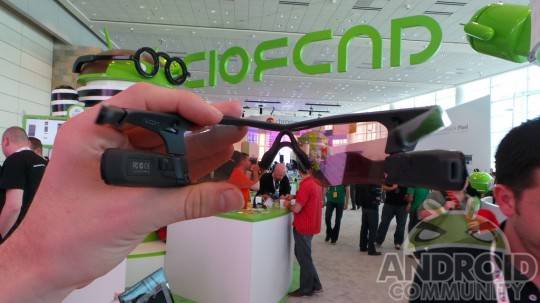 So when can you get your hands on Recon Jet? Before Google Glass! Recon confirmed they’re aiming for a late 2013 launch. They will initially be made available to developers, then launch later for the public. We’ll update when we know official specs, details, and of course pricing. Then we can’t wait to try them ourselves as we hit the biking trails.