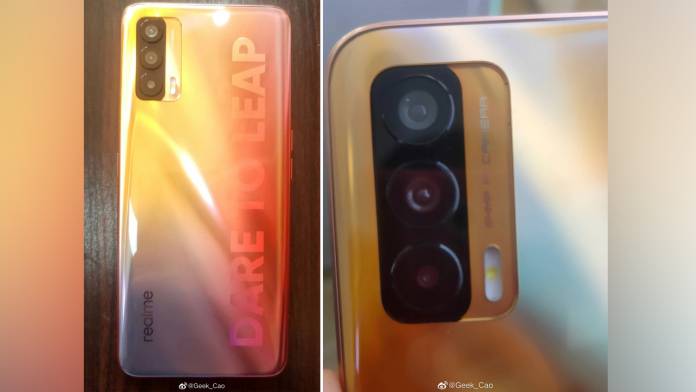 With the first Snapdragon 888 powered phone finally being released, other OEMs will follow suit and you are going to see a sort of rush for capturing the powerful smartphone arena. Realme also wants to be in the thick of things, and with a new leak, things are looking promising. Code-named “Koi”, the Snapdragon 888 powered device has been spotted on a new Weibo account, allegedly created by Realme itself to act as a platform for posting information regarding the upcoming device.

The phone could be finally called the Realme V15 (or it could be another device) and it’s been teased to be a part of the series including the flagship Realme Race phone. This one will be a mid-range device boasting a stellar triple camera module and peculiar gradient back having the tagline ‘Dare to Leap.’

Weibo user @Geek-Cao posted a couple of photos of the device and some details but later the post was deleted by the user. However the information and the photos circulated over the internet, suggesting that the phone will have 64MP camera sensor and 125W ultraDART fast charging capable of charging the 4,000 mAh battery in just 20 minutes.

By the look of it, the device is going to have a very outlandish orange and yellow hue which we’re afraid looks a bit too gaudy. Hopefully, there will be other color variants and we hope there is a matte finish version too.

Whether ‘Koi’ will be indeed the ‘Race’ or even the V15 is anybody’s guess at this point in time. It could be a different device in the series too, so the real picture is still unclear. But one thing is for certain, Realme is shortly going to announce a Snapdragon 888 powered device to lure in more loyal followers.