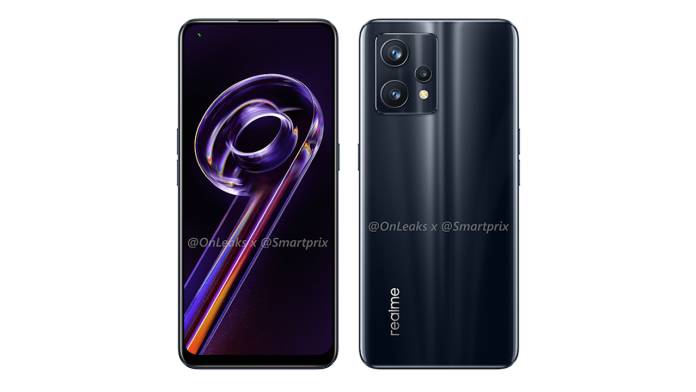 We’re still waiting for the official announcement of the Realme 9 Pro but just like any other upcoming device now, there are a lot of leaks and rumors about it. The specifications and the render based on those specs have now been leaked so we get a clear idea of what the device might bring to the table. This is after a sketch of the Realme 9 Pro series was shared which turns out to be the Realme 9 Pro+ which will also be announced at the same time although we don’t know when.

SmartPrix shared what their partner OnLeaks was able to get which are some high-quality render images and the specifications which were used to create the images. The renders show that the display will have slim side bezel around the screen and also has a narrow chin. There seems to be a punch hole where the selfie camera is housed and at the back there’s a triple camera setup. The LED flash is located on a slightly elevated module.

As for the specs, we can expect the Realme 9 Pro to have a 6.59-inch display with a 120Hz refresh rate. It will also have an in-display fingerprint sensor for biometric security purposes. It will come with a Qualcomm Snapdragon 695 5G chipset, 8GB RAM, and 128GB internal storage. As previously mentioned, there’s a triple camera setup for the main shooters – a 64MP + 8MP + 2MP combination while the front-facing camera has a 16MP lens.

There is a Realme branding at the back of the render, plus a volume rocker on the left and on the right, you get the power button. The render shows a black variant which is called Midnight Black but we can also expect two other colors called Aurora Green and Sunrise Blue. Battery-wise, you’ll get a decent 5000mAh battery with 33W fast charging out-of-the-box. No indication yet if we’ll get support for 5G connection.

There are no other specs leaked but so far, that’s what we’re getting from this upcoming smartphone from the Chinese OEM. As for the price range, we can expect something relatively affordable given the previous smartphones from Realme.