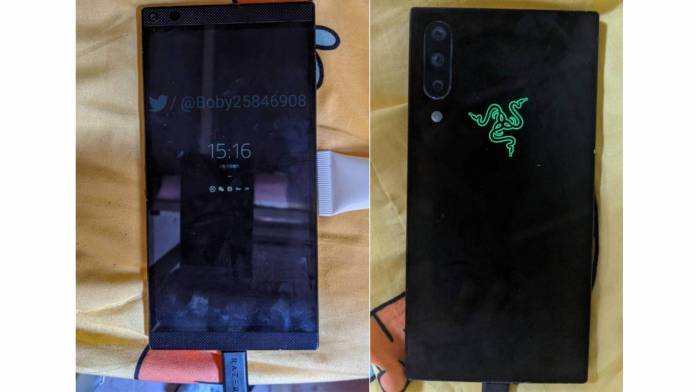 Gaming giant Razer released its maiden smartphone in 2017 and then followed it up with Razer 2 in 2018. After that, the company didn’t release a successor – saying that they were not ready for a third generation and it will only be a reality with the coming of 5G technology to the masses. Presumably, there may have been other problems that brought the Razer series phones to an abrupt end. Now, there is a Razer Phone 3 prototype spotted in Taobao marketplace which makes things interesting.

According to XDA Developers, the phone was listed shortly on the Chinese marketplace and then pulled down. The images have also been shared by Twitter user @Boby25846908 – which show the smartphone is not in fact a gimmick. The rear of the device shows a triple camera module while the front of the phone has thin bezels with the speaker grills on top and bottom. Also, there is a front-facing camera above the screen and a sensor alongside.

The design of this prototype looks nothing future-forward or even 2020 worthy, as devices these days have very thin bezels with better screen-to-body ratio. The back of the phone isn’t very impressive either, with a sluggishly designed camera housing. The only thing that looks good is the brand’s logo.

If Razer is in fact prepping a device for this year it has to be way better than what we are seeing here. Perhaps, the brand wants to create a unique identity for its device among a sea of phones which look more or less similar. Other than these images, there’s not much about the specifications of the phone yet, which could have made things clearer.