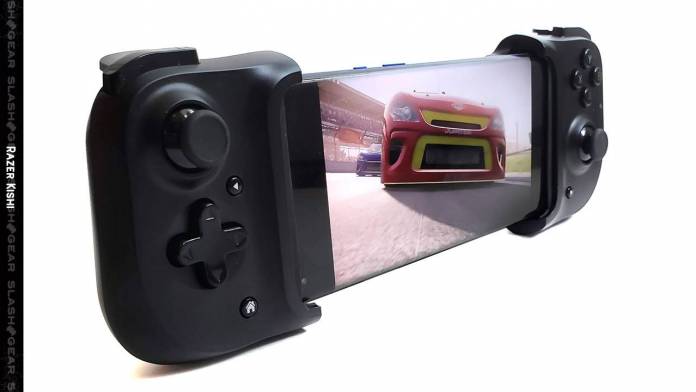 First revealed at the CES 2020, Razer Kishi game controller for smartphones looked promising. Now the telescopic gaming controller is finally up for purchase and it looks similar to the Nintendo Switch, Razer Junglecat, and RedMagic Pro Handle. The major difference is that Razer Kishi can be used with almost all modern smartphones that have center-aligned USB Type-C or Lightning port. This physical connectivity as opposed to Bluetooth means zero input latency for lag-free gaming experience.

The button layout of this split design controller looks similar to the Xbox controller since the ABXY buttons are relatively in the same position. There are 8-way D-pad buttons on the right and the usual triggers and bumpers on top of both sides. The button presses and joystick movement feels snappy. On the downside, Kishi doesn’t come with 3.5mm jack connectivity so you’ll have to rely on the Bluetooth audio connectivity option.

Another good feature on the accessory is integrated pass-through charging which juices up the device battery for non-stop gaming. The expandable/collapsible design makes it possible for the phones to be sturdier while you are gaming and feels good in hands. Also, there is support for cloud-gaming services like Stadia which goes well for the future of this controller.

Razer Kishi for Android phones is available for purchase from multiple retailers in the U.S., Canada, and Europe for a price tag of $79.99. The iPhone compatible controller will be available in the coming months. The controller is compatible with devices running Android 8 Oreo (or later) and iOS 9 (or later).