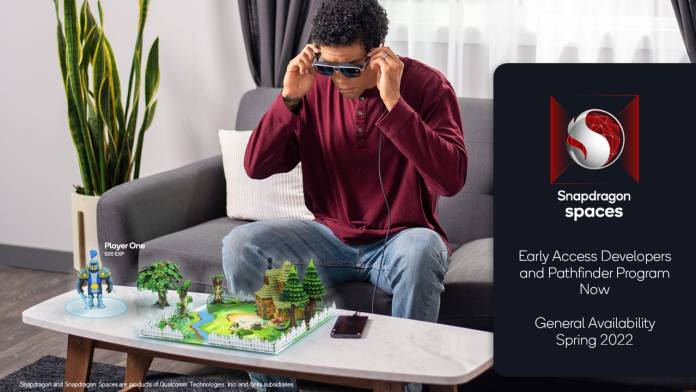 At the Augmented World Expo 2021, there were many interesting announcements, and Qualcomm took center stage to serve its take on the future of the mixed reality world. Metaverse has focus on the completely knit world of virtual reality while mixed reality (XR) is a blend of the real world with the virtual one. Qualcomm has its eyes set on the XR side of things, and its Spaces XR Developer Platform kit will make things easier for developers to create their applications for AR headsets and devices.

There was no reference of hardware for the Spaces XR Developer Platform but Qualcomm is, in fact, in talks with partners like T-Mobile (with the Accelerator program) to take things forward. The venture has been in the works for the last decade now and big names in the AR industry like Niantic (who recently launched Lightstrip platform) are in the loop for metaverse applications.

Other global hotshots like Lenovo, Motorola, OPPO and Xiaomi are also in the ecosystem for the hardware side of things. In fact, the ThinkReality A3 glasses developed by Lenovo are based on the XR1 Smart Viewer design, and they’ll bring the Snapdragon Spaces to life next year.

The whole thing will revolve around the open and cross device ecosystem as the software developed will be capable of running across multiple platforms like AR glasses or AR headsets. This will be the first time ever, a head-worn AR platform will be fully optimized for AR glasses tethered to a smartphone.

At the event, Qualcomm also said, the OpenXR conformant runtime will support popular developer tools for applications like Unreal Engine 4 and Unity. That means, more developers will be able to leverage the capabilities of the platform without any major hiccups.

For now, the Spaces XR Developer Platform is only available for select developers like Holo One and NZXT, and wider access will follow next year. There’ll be tools like hand tracking or position tracking also added to the ecosystem, for which Qualcomm has got assets from HINS SAS and Clay AIR.