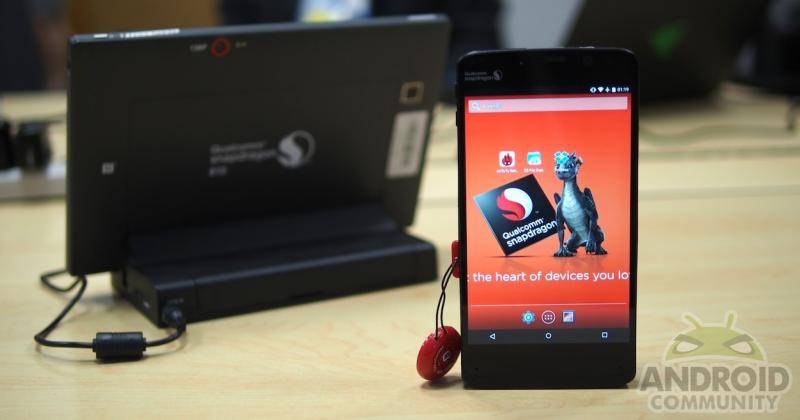 With MWC 2015 comes new smartphones and devices, but part of the discussion will most likely revolve around the technology powering these. And perhaps there won’t be a hotter topic than Qualcomm‘s Snapdragon 810. Not yet out in the market, except for the LG G Flex 2, the chip is already mired in controversy left and right. Does the dragon deliver all its promises without the problems that are rumored to hound it? We fly to Qualcomm’s San Diego office to get a first-hand look, and the results are quite spectacular and, frankly, unsurprising.

Considering there are very few, if not no, commercial Snapdragon 810 devices yet, these tests have been done on Qualcomm’s own Mobile Developer Platform (MDP) kits, one tablet and one smartphone. The two are practically the same in features aside from the screen and memory, with the tablet sporting a 4K display and 4 GB of RAM, while the phone only has a 2K resolution and 3 GB memory. These are, of course, developer devices unoptimized and unburdened by OEM changes. They also come from Qualcomm directly, so do take them with a pinch of salt.

We know benchmarks aren’t everything, but we still love citing them and referring to them. They are useful as reference points to set our base expectations, but we must remember that real-world performance will always be more relevant. With that disclaimer aside, we dive into the Snapdragon 810’s performance on a couple of these tests. It should surprise no one that the chip leaves everyone, even its own predecessor, in the dust.

Qualcomm’s own Vellamo test suite awards it a 2,286 score. Interestingly, the OnePlus One’s 1,662 ranked it at second against all other major OEM.

SunSpider’s Javascript Benchmark has it finishing the test in 344.5ms, while Google’s Octane Javascript test gives it a 7,907 mark.

Quadrant’s results are almost unbelievable, with the Snapdragon 810 scoring an almost impossibly high 30,211, with the rest of the contenders earning only a fraction of that amount. 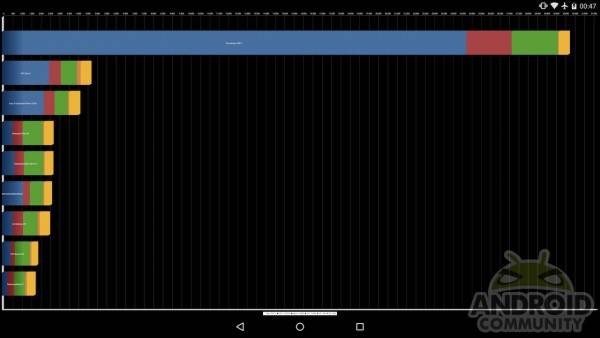 BaseMark ranks it under the High Quality category for Gaming Performance with a score of 18,311, while Futuremark’s IceStorm test gave it a high 24,372 score.

Crowd favorite AnTuTu marks the MDP tablet with 52,102 points but the smartphone scores even higher at 61,692 thanks to the lower resolution. In Geekbench’s single-core test, it scores 1,318 while in the multi-core test it gets 4,254.

In all of these test, there isn’t a single instance where the Snapdragon 810 is outranked by any other chip, even from its own product line, from any device manufacturer.

At least based on these scores, and in theory, there is little doubt that the Snapdragon 810 is the top dog of the mobile chip market. But given the news and rumors of the past days, raw power is probably not the biggest concern of would be users and business partners. The lingering question is whether the processor is too hot to handle. The short answer is no. The longer answer is that, yes, of course it heats up like any other processor would, but not as much as its own 800 predecessor and not as quickly.

Qualcomm puts the normal operating temperatures of chips at around 30-35C, and that’s with normal usage like phone calls or basic photo taking. Switch to a high-end game or high quality camera recording, you could very well hit the 35-45C mark. If, by chance, you go even higher than that, the chip’s Thermal Mitigation system kicks in, closely monitoring the temperature and throttling clock and voltage to cool things down.

These figures come from Qualcomm itself and based on its own MDP devices, so it will still need real-world tests. But at least on paper, the heat situation isn’t as bad as rumors made it sound.

In mobile devices, the processor’s CPU is hardly the only worker, so raw performance is also hardly the only defining feature. In other areas, the Qualcomm Snapdragon 810 continues to shine, or at least tries to. There is no denying that the chip was designed around 4K media, supporting high resolution, high quality video, not just in output but also in input. With the proper camera sensor and supporting components, the chip can hold its head proud against some more dedicated digital cameras.

The Snapdragon 810 also has wireless charging built in, just waiting for device makers to add an antenna array to complete the loop. Sadly, it is not the more ubiquitous Qi wireless charging standard that was used. It was the Alliance for Wireless Power’s (A4WP) Rezence that was used. If the Snapdragon 810 becomes the de facto chip for mobile devices this year, Rezence will see an immediate boost in adoption. One benefit that Rezence brings is that there is no need for aligning with the plate when charging, offering more flexibility in terms of placement.

Perhaps the unsung killer feature of the Snapdragon 810 is the modem. We’ve already heard that it will be the first to flaunt support for Cat. 9 LTE, a technology that is used very little anywhere. But more than that, the chip is also supports a wide array of wireless connections and network bands. It can support both FDD and TDD networks, both with Carrier Aggregation even. In essence, the Snapdragon 810 can handle all of the world’s networks, even China’s, given the right antennas. Definitely one chip to rule them all. 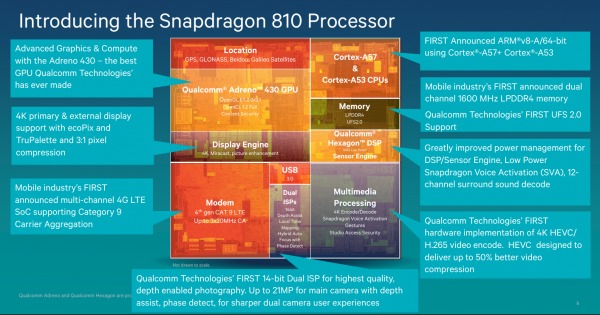 These all look good and tasty on paper and on screens, but we will definitely have to wait for a commercial device to test the Snapdragon 810’s might. A lot can happen that can dampen the chip’s performance and real-world usage is more significant than any benchmark. With a few new smatphones looming over the horizon, we might get our chance pretty soon. For now, however, Qualcomm can bask in pride that there is no around yet to tame this dragon.