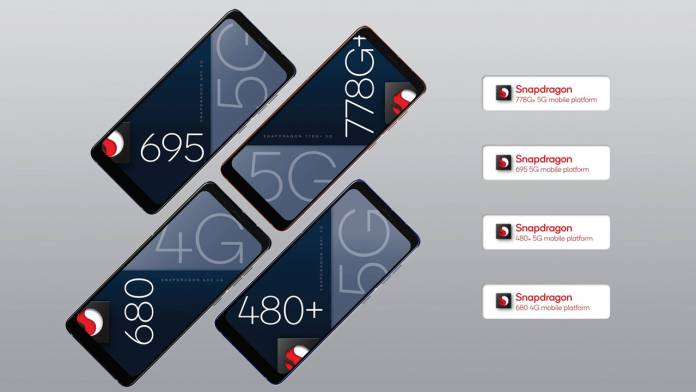 Qualcomm is eying the mid-range segment of the smartphone market with its new line-up of chipsets that are better than the current version of the existing mid-range SoC’s. The new processors will adorn the guts of 2021 (to be released devices in this quarter) and 2022 mid-range and upper mid-range devices. Qualcomm wants to bring the 5G connectivity to the masses with this move at affordable price – hence, the focus is mainly on 5G enabled SoCs. That said, the lineup includes one 4G option too.

First up is the highly popular Snapdragon 778G processor that’ll target the premium mid-range segment of the market with a 20 percent GPU performance boost. Called the 778G+, the chipset has a slight improvement in CPU clock speed over the 778G as it now runs at 2.5GHz compared to 2.4GHz.

Next in the lineup is the Snapdragon 695 5G capable SoC which is an improvement over the Snapdragon 690 chipset with an updated Kryo 660 CPU having 15 percent more boost. The GPU speeds also get a bump-up of 30 percent and the Image Signal Processor (ISP) gets an update along with the support for mmWave 5G.