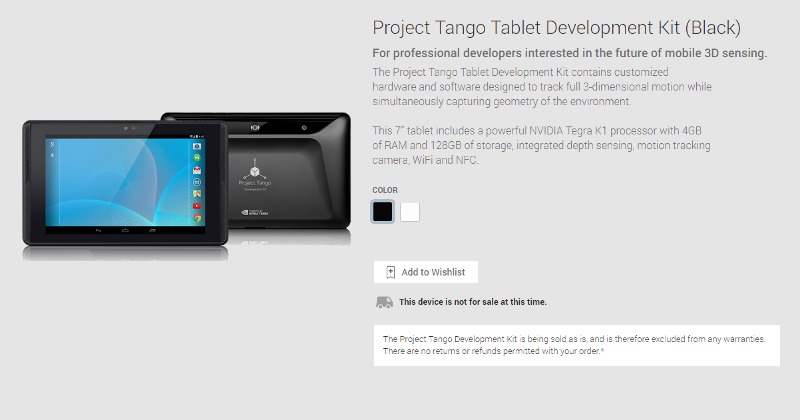 Ever wanted a super powerful tablet with powerful cameras and an understanding of the world as we see it and not as flat 2D images? If so, then Google’s Project Tango might just be for you and, coincidentally, the tablet has just shown up on Google Play Store. That said, the device isn’t actually available for purchase just yet, and neither is Google letting on how much it will cost. But given the features and purpose of the tablet, we expect it to cost quite a lot.

Unlike Project Ara, which aims to produce a commercially viable modular phone, Google ATAP’s Project Tango has a more theoretical goal in mind. To put it simply, it wants to help computers, in particular Android devices, see the world in full 3D just like how we humans see it. In short, it adds an element of depth to an otherwise flat scene that a camera produces. To what end, you might ask. This new depth perception could be vital in the future for navigation, allowing computers to pinpoint an object or target with higher accuracy in all three dimensions, which could also greatly benefit visually impaired people.

To pull this off, the Project Tango tablet sports quite the hardware, starting with the fast NVIDIA Tegra K1 chip, the same thing that powers NVIDIA’s gaming SHIELD Tablet. RAM is at 4 GB, so far the highest in the mobile world, while storage is 128 GB, which is starting to make its way to high-end smartphones. But the real stars of the show are the cameras and sensors, particularly the ones found on the back, that help convey depth information to the system. These include a 4 megapixel RGB-IR camera, a 170-degree motion tracking camera, and an IR projector.

The Project Tango tablet is more of a research device than a consumer one, so it’s a bit surprising to see it on Google Play Store, in choice of either black or white colors. That said, we still don’t know for sure how Google plans to sell this device and could very well just be using Play Store as the access point for labs and educational institutions looking to purchase it.