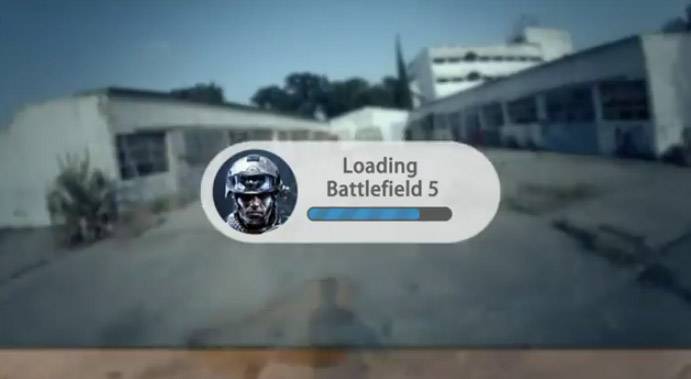 Project Glass has inspired its fair share of constructive conversation, not to mention parody. But the latest video to play off of Google’s augmented reality project takes the cake and the checkpoint. YouTube user ThereIsACanal used the ideas presented in Google’s now-famous concept video and extrapolated to see what “Battlefield 5” could look like when taken into the real world. The results aren’t exactly a cinematic masterpiece, but the video does a great job at illustrating the possibilities inherent in augmented reality gaming.

The video starts off innocuously enough: our protagonist casually meets a buddy on the street, recognized via Project Glass’ Google Latitude integration. He then hops the fence into an abandoned building complex (with his glasses kindly reminding him that he’s breaking the law). When “Battlefield 5” loads up, it generates weapons and BDUs for the player and populates the space with enemy fighters, which can be killed with the virtual rifle the player is holding. Enough talk, just watch the video:

This sort of virtual and real-world mesh is a common theme in later science fiction, like Daniel Suarez’s novel Daemon. But now that it’s technically possible – if not quite to the degree shown in the novel or the video – there are all sorts of questions that arise. How would you incorporate feedback when the elements you see in Project Glass aren’t there? How would you control something as complex as a modern shooter without resorting to some kind of tethered controller? What kind of psychological impacts would bringing hyper-violent modern games into actual, physical locations have? It’s a fascinating and challenging idea.

There’s still very little concrete information available on Project Glass, though Google says it’s hoping to use feedback from the concept video and photos to refine the idea. We hope that it becomes a reality somewhere beyond the Google Campus soon – and that industrious designers and developers can take videos like these out of the realm of fantasy.