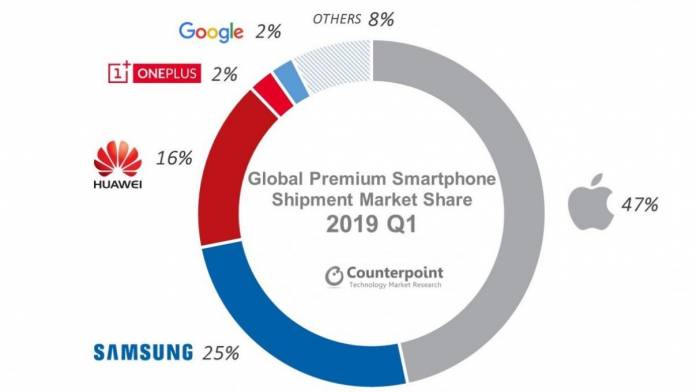 The entire premium smartphone market has been affected by Apple’s shrinking shipment numbers. A report states that the global market is down 8% in the smartphone premium segment for the first quarter of 2019 as Apple’s numbers have fallen 20% year on year. But the good news for some brands like Samsung is that their market share has increased. The Korean OEM now has 25% of that particular segment for that same time period which is their highest share for the past year or so.

This data is from Counterpoint Research’s Market Monitor Service for Q1 of 2019. Apple seems to be losing ground as more people are keeping their iPhones for longer periods of time, not seeing enough reason to upgrade to the newer versions that they released. But what is their loss is Samsung’s gain as their shipment numbers seem to be getting better. Their strategy to release three new flagship devices with different price points seem to be working in their favor, not to mention the design and feature improvements in the Galaxy S10 line has made it more attractive to users.

Another reason for the low numbers for premium devices is probably the sluggish Chinese market. We might see some improvements when 5G becomes commercialized as a lot of brands are also hinging on this new technology to boost interest in 5G devices. While Huawei has been having much talked about issues with the US government, their shipment numbers for Q1 were pretty good, even managing to surpass Apple in China. But the trade ban imposed on them for alleged spying for the Chinese government may have a big effect on them over the next few quarters.

When it comes to regions where premium smartphones are big, North America is still the largest market with a 30% share while China and Western Europe are 2nd and 3rd respectively. Chinese OEMs are trying to penetrate the European markets and so competition is intensifying. OnePlus is one brand that has managed to break into that segment and they’re now a steady presence in the top 5, except for Latin America and ironically enough, China.

The premium segment continues to be a tough market to enter especially for new players. You need to have brand equity to convince people to shell out a lot of money to purchase your product. The top three brands, Apple, Samsung, and Huawei already make up 88% of the market.