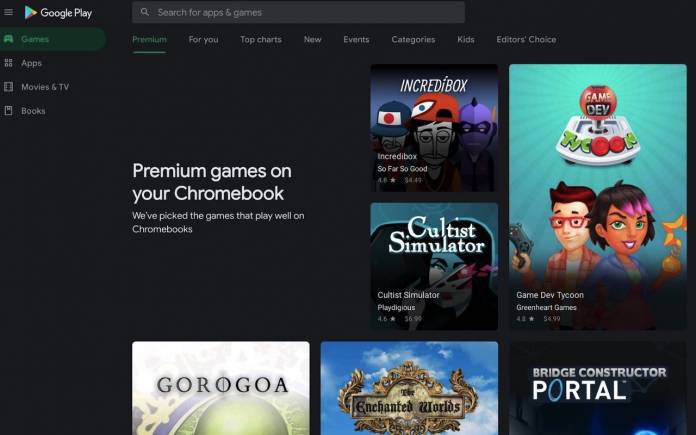 With a lot of Chromebooks being introduced in the market today, perhaps it is the best time for game developers to work on their titles and offer them on the Play Store as premium games compatible for Chromebooks. And with many people staying at home these days, such games will appeal to more young kids and adults or students and working people. Google has added a new section for Chromebook-compatible games. They are mostly “premium” as they have been optimized to run perfectly for desktop interfaces. This means the games are not just playable on smartphones and tablets. They can also be played on Chromebooks–with or without touch input.

If you check the Google Play Store on Chrome OS, a section will show “Premium” games for Chromebooks. These are “games that play well on Chromebooks” as described. The section isn’t available for all Chromebook users yet. We’re assuming it’s still being tested.

These aren’t the only games that can be played on the Chromebook. What makes them special is that they have been optimized for Chrome OS already. It’s possible that they can also be played with a keyboard or mouse like any other PC games.

This new section may only be appearing to a few Chromebook users. Check the Play Store and see if the new section is ready. Don’t be dismayed if you don’t have it yet. It’s better that you wait for the official release because that would mean fewer bugs and issues.