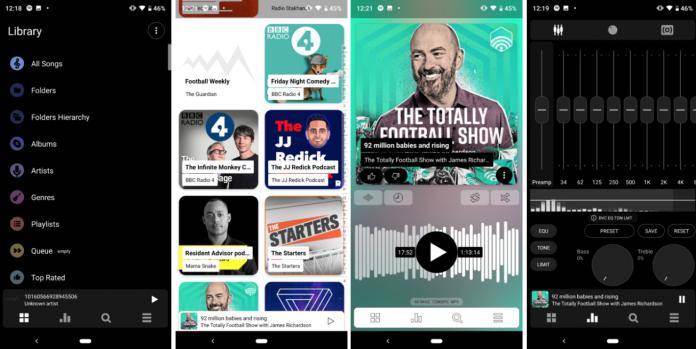 Yes, people still use music players to play music that they own a digital copy of. Not everyone just goes and streams from Spotify or Google Play Music (although most of us probably do). However, it’s getting harder to find a really good app that will play your music for you. Poweramp is one of the more popular ones but we haven’t seen a major redesign for a few years now. In 2016 they released an alpha build for version 3 and finally, they have started rolling out the stable build of this, which of course has better UI and design.

While the look isn’t really the standard Material Design that Google has been encouraging apps to adapt, it’s still a huge improvement from the dated design and UI that it has been sporting for the past few years. The new user interface is much more modern and includes new visualizations, which for some reason is still pretty important for those who use music players. There is also a new waveform player seek bar.

And in keeping with the updated design, there is also now a dark mode option, which users now appreciate (demand) from the apps they use. There are also some changes in the way you’ll navigate the app, so if you’ve been using this app for some time now, you might have to adjust with this new version. But they’ve included hints within the app to help you out.

The detailed changelog also states it has a new audio engine which includes hi-res output, a new DSP (Digital Signal Processor), and an updated equalizer. Version 3 should be rolling out to users now and if you still have not found yourself a music player, this should be an option for you to try out. You can download the Poweramp music player from the Google Play Store for free.