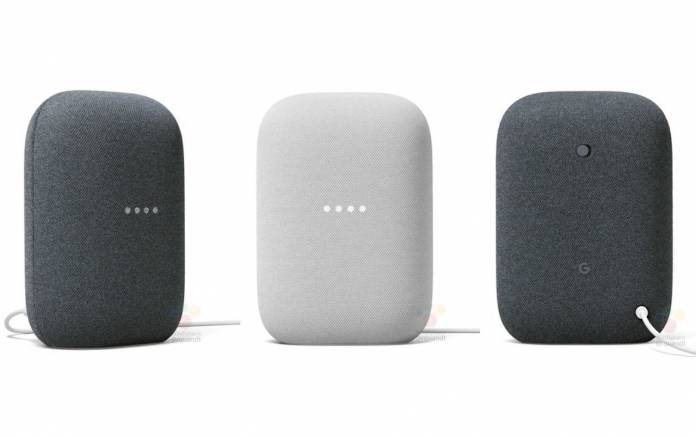 By the end of the month, we’re expecting announcements from Google about their latest hardware. Aside from the new Pixel smartphones, we are also rumored to be getting a new Chromecast dongle and a new generation of Google Home. We’re seeing pics of these two devices leaked and we’ve already told you a bit about the former. Now it’s the latter’s term and aside from images, we get a few more details about it, including its possible name – Google Nest Audio.

According to the official marketing images leaked by German website WinFuture, the main difference with this new smart speaker is that it is upright and is more like a fabric-wrapped brick instead of the half fabric, half hard plastic that is the previous Google Home. And this upcoming smart speaker actually has curved edges. It has two finishes available at launch: Charcoal (dark grey) and Chalk (off-white) but who knows if we get more colors in the future.

There are four LED lights in the front which will probably light up when you’re using Google Assistant to give commands or ask questions. At the back there is a power cord and a physical switch in case you don’t want the smart speaker listening in on you. There doesn’t seem to be any battery option here so you need to have the device plugged in the entire time. Earlier rumors seemed to suggest a battery but based on the leaked images, there are none.

We don’t have the other specifications of the smart speaker so that we will have to wait for probably in the next few days. We might indeed get a Google Nest Audio as the name as Google has been renaming some of their devices to come under the Nest branding. We’ve already seen the mini versions of the smart speaker named to Google Nest Mini so this wouldn’t really be so surprising.

All will be known at the upcoming fall hardware launch of Google products. We can expect the announcement of the Pixel 4a 5G, the Pixel 5, the Chromecast with Google TV dongle, and this new Google Nest Audio.