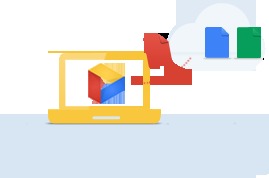 Last week we started to hear resurgent rumors that Google’s remote storage service, labelled “Google Drive” and integrating across Android, web and desktop platforms. Today GeekWire got their hands on what’s being presented as the wen interface for Google Drive. Submitted anonymously and blurred out to avoid identification, the screenshot looks basically identical to the web version of Google Docs, but with files and folders instead of documents. It looks pretty legitimate, though we’d remind readers that this sort of thing would be very easy to fake.

In addition to the screenshot, a purported logo has popped up in a small explanatory image. It depicts a rudimentary illustration of cloud file storage, with a Google-style red, blue and yellow triangular logo on a laptop. Again, all of this seems to fit in with Google’s current interface and aesthetic, but could also be faked. There’s still no official news from Google on a remote or cloud storage service, but that hasn’t kept analysts and fans (like us!) from speculating on its creation.

If you’ll indulge us: there’s no real reason for Google not to introduce a cloud storage service, aside from the fact that it wouldn’t be profitable (and that’s never stopped them before). They already provide “dumb” storage for Google Docs and Google Music, and gigabytes worth of email storage for every Gmail user. Adding more flexible storage to make a true Dropbox, iCloud and Box.net competitor would be easier for Google than almost any company – with their infrastructure, they could give away practically unlimited storage and corner the market in a matter of months. The fact that they’ve already got successful web, browser and mobile integration via Android doesn’t hurt either.

The resemblance to Google Docs is interesting. It’s possible that Google Drive could replace the cloud document service, essentially creating an all-in-one service that combines high density storage with document editing and sharing. Then again, it could just be Google’s software engineers reusing elements that work well – or, again, this could be a major fake. With all the talk of Android@Home and Google’s push towards media integration, expect to hear more and more about Google Drive leading up to Google IO in June.