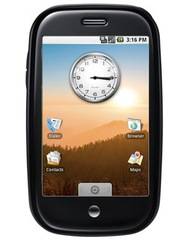 We are still presumably months away from the launch of what’s hyped to be 2009’s hottest handset, the Palm Pre.  The timeframe hasn’t stopped a few, however, from beginning the port of Google’s open mobile OS, Android, to the newest must-have device.

In fact, efforts to port Android’s system to the OMAP 3 language (the processor architecture used in the Pre) have been ongoing since July of last year.  The biggest hurdles will be accessing the Pre’s low-level system, called the bootloader, to enable switching between its webOS and Android, and finding enough space to do it in Pre’s fixed 8GB of internal storage.

Since the G1’s bootloader tries to boot from the expansion card first, Android’s first publicly-available handset lends a more easily tested-upon platform for dual-booting.  The Palm Pre does not have user-upgradeable storage, so a new OS would need to be flashed to the device’s memory banks over a USB serial connection.  Once running on the Pre’s hardware, Android would need drivers written for it to allow control of the touchscreen, camera, cell phone radio and the like.  It also remains to be seen how the secondary system would be stored on the phone without compromising the existing functions of webOS.  One thing is for certain: once Pre has been released, its hardware is sure to be tried and tested to see what it’s truly capable of, including running things other than Palm’s intended webOS.