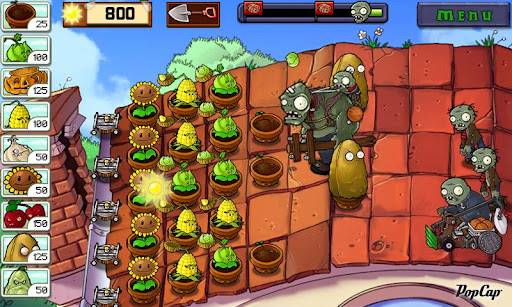 Perhaps unsurprising given the immense success of the first Plants vs. Zombies game, PopCap has announced that a sequel is in the works. Plants vs. Zombies 2 has a release window of “late spring 2013” at the moment, with PopCap not getting any more specific than that. In fact, PopCap’s announcement was painfully slim on details, other than the developer noting that players can expect “a bevy of new features, settings, and situations.”

Truth is, fans of the first Plants vs. Zombies probably don’t need details to get excited, as were sure the knowledge that new PvZ game is on the way will suffice for now. It seems pretty safe to assume that players will be given a handful of new plants to use as they fight off the invading zombies, and we’ll probably be treated to some new zombie types as well. Other than that though, it’s difficult to say where PopCap will go with this one.

For those of you not in the know, Plants vs. Zombies offers a unique twist on the tower defense genre. The basics of the genre are still present, but in Plants vs. Zombies you’re defending your backyard instead of some keep and you’re doing so by using an array of plants. Like most of PopCap’s games, it became extremely successful and can get pretty addicting at times, sucking away hours of time when you probably should have been doing something more productive. If that sounds like something you want to get in on, it’s available now on the Google Play Store, along with pretty much every other platform imaginable.

So now we have nothing to do but to sit back and wait for this late spring window to roll around. Judging from that far-off release window and PopCap’s hesitancy to share any real details, it sounds like work on the sequel is just getting underway. Expect some more media on Plants vs. Zombies 2 soon, because with as successful as the first game was, you know Electronic Arts is going to market the sequel like there’s no tomorrow.