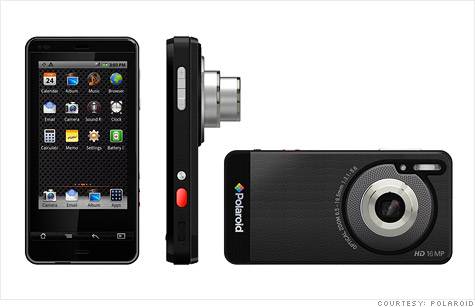 Last week we saw Android in a bunch of places we didn’t necessarily expect it, but Polaroid may have the most surprising one of all: a point-and-shoot camera that uses Android for web sharing capabilities. CNN Money got a look at the Polaroid SC1630 Smart Camera, their newest product for 2012. What makes the Smart Camera better than a smartphone? Aside from some photo-specific hardware, not a lot.

The good news first: the Smart Camera features a 3x optical zoom and a 16-megapixel digital sensor, specs that can’t be matched by any smartphone (Android or otherwise) at the moment. The Android-based software runs on a 3.2-inch touchscreen, and it’s focused on sharing, which Polaroid claims is the new central focus for its struggling brand. Instant posting to Twitter, Facebook, Tumblr and other places is implemented via  a WiFi connection, with Bluetooth thrown in for good measure. The Bluetooth connection may be used for a direct connection to compatible printers.

Now for the harsh question: who wants this? Sure, a little extra glass and a large sensor can beat the average smartphone, but people who take photos with their phones aren’t necessarily looking for amazing picture quality – Facebook is full of examples of bad mobile photography, and no one seems to have a problem with it. Even for those that do, cameras on Android and iPhone models are so good lately that they meet or even beat some point-and-shoot models. Why would anyone spend hundreds of dollars on a gadget that replicates functionality of something you already have (albeit in a slightly better way) but is limited to short-range networks?

Polaroid didn’t annuonce prising or availability information at CES. But the camera was presented by Lady Gaga. So there’s that.