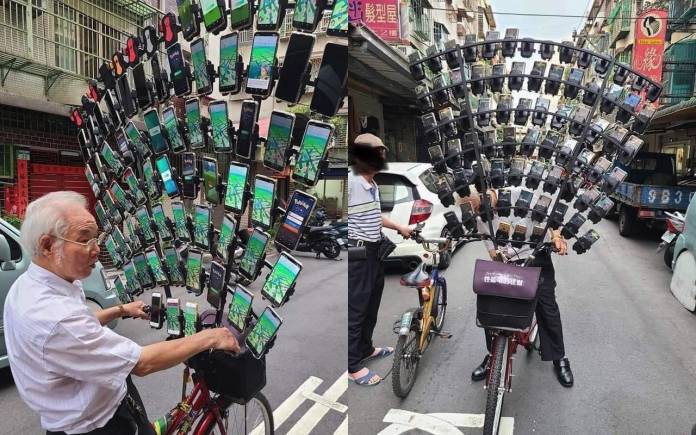 Remember Taiwanese Pokemon grandpa? Chen San-yuan first caught the public’s attention in the year 2018 when he became popular in his country for riding his bicycle while playing Pokemon Go on not just one or two phones but eleven. He became so famous that Asus tapped him to become a spokesperson the following year. Pokemon grandpa was hired to be the brand’s ambassador for the Zenfone series. He added more phones to the number and reached 22 phones–twice the original number.

This year, he attempts to beat his record by biking around with more phones. Of course, a special contraption has been made. It now contains 64.

The number is now almost three times last year’s record of 22. The 22 phones were actually 24 because he had two inside his pocket. He tried another time with 30 phones and then 45 phones a few months later.

This year’s attempt has all 64 phones mounted on a 6-row peacock-tail-shaped stand. The images show us the stand towers right above the handlebars of the bike.

We have no doubt this can be done. In a few months, the number may even go up. We’re just curious if all those are Asus Zenfones.

Also, we want to know who makes the stand. And umm, how many Pokemon has he caught already? How many gym badges have been won?