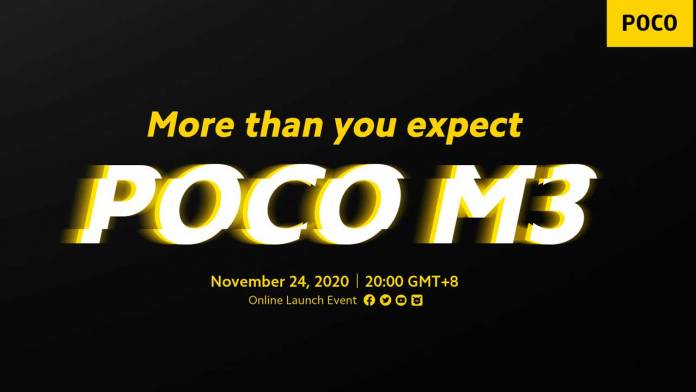 Xiaomi sub-brand POCO’s new smartphone has been a point of contention for the tech community for a while now. Finally, POCO has officially taken to Twitter to confirm the moniker and the release date of the new phone. Called the POCO M3, it will be launched globally on November 24. While the phone has just been officially confirmed, a lot is already been tipped about it. In the build-up to the launch, let’s quickly run through a few things that are almost certain.

Reportedly, POCO M3 will be unveiled via an online event – like its norm nowadays. The launch event will be streamed online on various social media platforms and the Mi Community. The upcoming phone is going to be the successor to POCO M2 launched earlier in India.

Recently, an unannounced POCO smartphone was spotted on Geekbench listing with an octa-core Snapdragon 662 chipset clocked at 1.8GHz and paired to Adreno 610 GPU. It is now almost certain that this phone is actually POCO M3, which is going to make a debut soon.

The POCO M3 is expected to feature a 6.53-inch water-notch aka dot drop display with Full HD+ resolution. The phone is going to pack a 6,000mAh battery with support for 18W fast charging. Interestingly, it is expected to have a dual speaker setup and triple cameras worthy of a decent mid-ranger.

For the optics, this unannounced phone is going to have a 48MP main camera with a wide and a depth sensor. The specifics of the other two lenses in the triple camera module are not confirmed and same is the case with camera on the front. In totality, this is going to be a good mid-range option for fans who appreciate the magnificence of POCO phones.