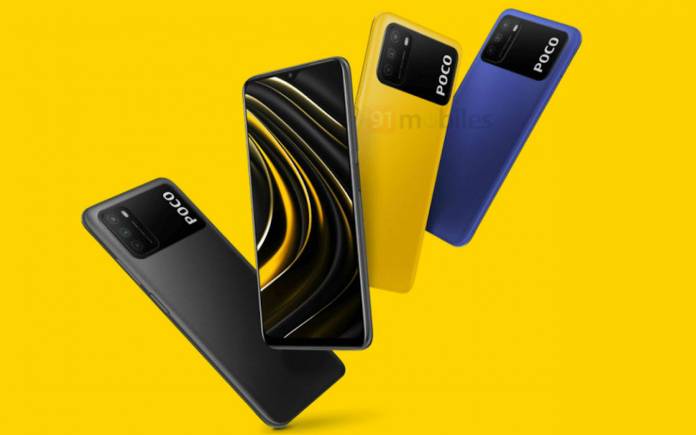 A new POCO phone will be revealed soon. A November 24 launch is expected and we’re expecting a powerful phone with a 6000mAh battery. We have no doubt about its arrival. It’s only a matter of time. It will follow the Poco M2 Pro that earlier reached India. Before this, the POCO C3 was also released in the country as a rehashed Redmi 9C. The latest we have on the Poco M3 is an image render that presents the complete design of the smartphone.

The POCO M3 is believed to come with triple rear cameras and a waterdrop display. It will launch in Europe first. Some details were leaked and we know the device will feature a 6.53-inch FHD+ Dot Drop display. It will run on Qualcomm Snapdragon 662 processor.

The phone may come with a dual-tone finish on the rear. The waterdrop notch is present. It is where the selfie shooter will be. The triple rear camera is housed on a large rectangular camera module where the POCO logo is also located together with the LED flash.

The chin is not so narrow. We don’t see any rear fingerprint sensor but there is on one side, below the volume rocker. On the left, there is the SIM card tray.

Possible color variants are as follows: Blue, Yellow, and Black. Let’s wait and see next week.