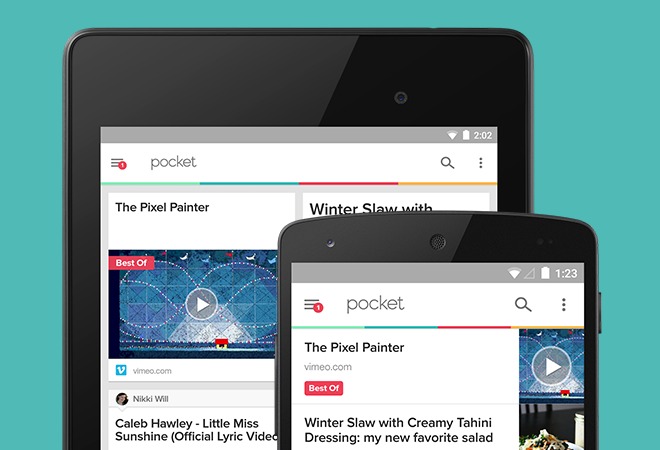 Your favorite (well, at least it is our favorite) offline reading service Pocket has received an update which makes it virtually ready for Android 5.0 Lollipop. Version 5.7 has now adapted its own version of the Material Design while still remaining essentially Pocket-like. The update also brings the ability to search for items in your app through Google Now. Android apps are “cleaning house” like crazy in preparation for Google’s major update which is expected to start rolling out in the next few months.

At first glance, you wouldn’t notice any major changes with how Pocket essentially looks. But for keen eyes (and developer eyes as well), you would notice that the navigation menu has been revamped, the icons have been slightly updated, the status bar is now in flat gray and a red hero color is now in the multitasking menu. Even though it’s adapting Google’s design principles, it still looks like the Pocket you’re used to (and probably love) but it is obviously preparing for the arrival of the Lollipop.

Another update is that you can now use Google Now’s voice search to look for items on pocket. Just say the magic words, “OK Google. Search for ______ on Pocket” and it will directly bring you to Pocket with your search results. This is a pretty nifty way to access your saved links especially if you’re on the go and hurriedly searching for specific items or keywords.

Pocket 5.7 is already rolling out to users. But if you haven’t received it yet, you can head on over to the Google Play Store to manually update it.