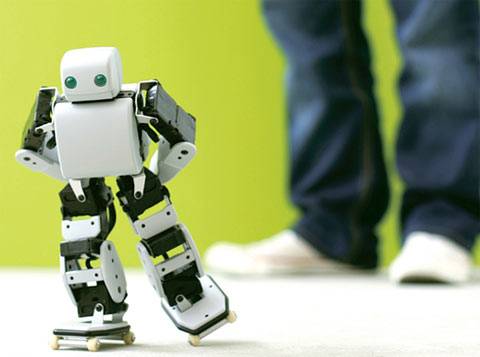 Plen is a “desktop hobby robot” released by Akazawa (think Japanese hacker whizzes), and has a name derived from the English word “Plain”. But this little android is anything but plain, as it’s a miniature bipedal robot that can be controlled via your Android handset.

Paired with a native Android app via a Bluetooth connection, Plen can execute a series of complex poses and actions.  Um, like dance, and even skateboard.  Approximately 9 inches tall, the robot can be controlled either by your smartphone or PC keyboard.  Sometimes you have to hand it to the Japanese.

Plen robots are already selling at AudioCubes for 262,500 yen, or $3,000 in a limted edition release of 50 units, so if you have cash to spend (as if your Nexus One w/o contract wasn’t pricey enough), go grab one as soon as you can before they run out.  Or you can just watch the video and see it pull off some interesting dance moves.  Who knows, but we may see some Android potential in robotics and autonomous applications in the future.