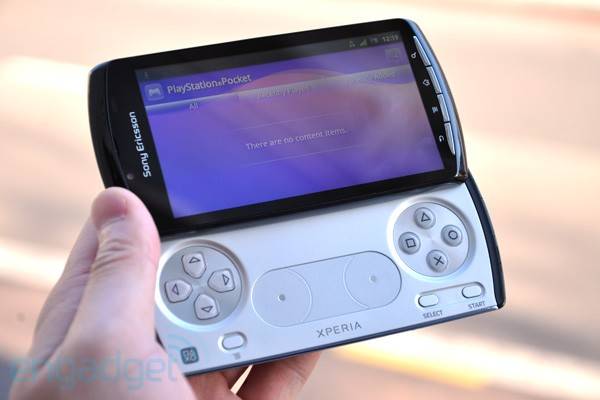 It appears that none other than our pals over at Engadget have gotten their hands on an official Xperia Play, aka the Playstation Phone. Take a very close look at the hardware, the software, the camera, and the smoothness of the overall experience. It looks fab, it looks great, and it looks like it’s going to be quite an amazing package.

Hardware – a 4-inch multitouch 854 x 480 LCD, the same that the x10 has. LCD looks great, LCD closer to the glass than the x10, all viewing angles work out fine, screen powered by Bravia engine for improved video playback. Still unknown if it’s powered by a Qualcomm MSM8655 chipset, clocking indicates 122.88MHz to 1GHz, coupled with Adreno 205 GPU, 512MB of RAM, 1,689 on Quadrant, 59fps on Neocore, and the Wifi doesn’t appear to work – probably because they don’t have a fully functional piece of equipment.

There’s the regular 4 Android buttons, physical buttons below the screen, as well as a power button in the top right, volume rocker between two game triggers on the right (on top once the game buttons are flipped out,) and what they say is a flimsy battery door. Inside there’s a 1500mAh battery, slot for SIM card and microSD card, and a “second mic” above the LED flash (for noise cancellation?), and stereo loudspeakers outside next to a USB port. Under the screen you’ll see the very familiar PlayStation controls. All the buttons you’d expect are there save for the extra set of buttons above, and the dual-shock joysticks are now touchpads.

Software – they compare the experience they’re having here on the Play to that of the one they’ve had with the x10, saying that there’s some comparison to be made, though this PlayStation phone is just a bit better, a user interface with tweaks that make all the difference when it comes to browsing, and browsing with speed. Engadget installed a couple of emulators (one PlayStation, the other Gameboy Advance,) and say everything works “ran pretty well.”

Camera – appears to be really great. They mention there might be a little too much red going on in several of the images they took, but that third party apps would easily be able to rectify. This is an 5 megapixel camera that looks quite nice, this number being disputed for the final release because of the nice quality.

Wrap Up – Engadget says they’re tempted by the game pad, and have enjoyed the device, but feel like questions about the games (how they’ll be distributed, cost,) as well as an unknown cost for the phone itself are questions too big to allow them to give a final verdict on the phone just yet. While we agree, we feel like the most important bit on this entire device is going to be how well the games, even if they’re overly expensive, play on the gamepad. PlayStation has had essentially the same controller for years and years now, will true believers be able to turn their hands a bit outward and expect the same experience? We’ll have to see.