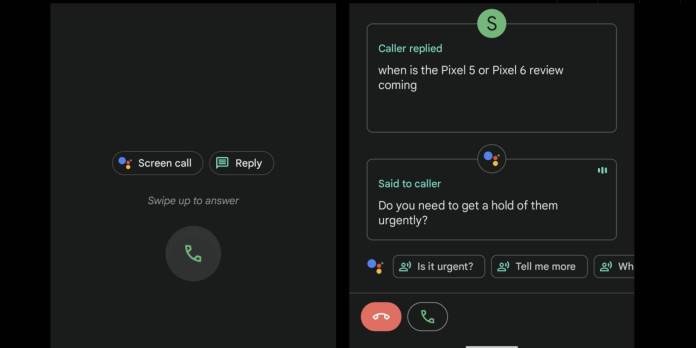 The Call Screen feature that was introduced to the Pixel 3 back in 2018 is a pretty useful tool for those who want to screen the calls that come in, especially in this era of robocalls and spam dialers. However, it was only limited to certain territories, specifically the U.S. and later on Canada and Japan. The good news for those who are in the U.K is that Google has started rolling it out for Pixel users there, slowly but surely.

Call Screen lets users screen their calls and reduce spam calls with the help of Google Assistant. Unfortunately, the version that seems to be rolling out in the U.K is not the automated one, which is still limited to the U.S. This means that when a call comes into your Pixel, you’ll have to tap the “Call Screen” button on the screen so it can do its job. The button is right beside reply and above the “swipe to answer” button and comes with the Assistant logo.

When Pixel 5 pre-orders started last year, the UK Google Store started promoting Call Screen as one feature that will come with it, although there was no official announcement at that time. 9 to 5 Google says that the feature has now been potted in some of the Pixel devices in the country. However if you check the official support page for the feature, it still says it’s only available in Canada, Japan, and the U.S so it means the roll out may still be limited or going slowly.

You can check if the feature is available for your Pixel device by going to the Google Phone app settings. Under the Assistive section, you should see the Call Screen option. There doesn’t seem to be any toggle that you need to turn on and so when you receive a call, you should get the Screen Call toggle which you should tap so your Google Assistant can start transcribing the call and show you a live transcript. This will then help you decide whether to take the call or reply with a preset message or just reject the call.

The Call Screen feature seems to be available for Pixel devices running on Android 11 and also the recent Android 12 update. There’s no news yet what other countries it will be available later on so let’s watch out for more announcements soon.