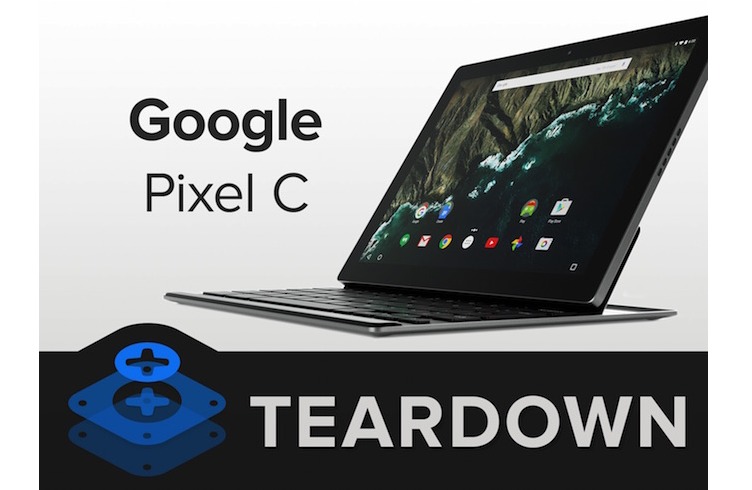 Google’s Pixel C isn’t as popular as we expected but the device certainly has a following. It’s the tech giant’s own tablet offering much like the Nexus to the smartphone arena. We have no idea how many units Google has sold since launch but a recent discount made it suddenly more attractive to some people and not just the developers.

Opening the Pixel C is a bit challenging as there’s a thin cable near the front-facing camera and it’s embedded on the display and not part of the chassis. Its’ difficult to open especially since there are a lot of adhesives used.

Display data cable is connected by a small daughterboard where the Synaptics touchscreen controller can be found. The iFixit team tried to disconnect the battery but found it also difficult because the connector can’t be found immediately.

Spread though the whole case are 17 magnets that allow connection to the keyboard. You’ll soon see the stereo speakers, USB C port bracket, and some more modular components like a rear-facing camera and an 8MP camera. Further into the tablet and after some heating, the adhesive pads are removed, as well as, the conductive foam and foam padding.

You’ll see a pinkish little coil that covers a control board containing the magnetic-field part of the battery. Nearby is a headphone jack port with a very long tail that also connects the right speaker and the inductive coil. Further underneath is a reflective backing that covers an LED board. The huge battery is also difficult to remove, no thanks to the tough adhesive used.

After prying open the Pixel C, we’ll focus on the plastic keyboard that is also difficult to open. Just remove some screws and heat a few seconds. You will see a big cable which is actually for the keyboard while the narrow cable lines up with an outside magnet–in this case, is for the magnet in Pixel C. Battery is still small and can be charged via induction.

It seems Google doesn’t want us opening the Pixel C. The IFixit guys gave this a 4 out of 10 Repairability Score. You are free to change many parts but the motherboard is tightly glued to the rear case of the phone. Google must have spent a lot of the adhesives so it’s not really easy to replace or repair.